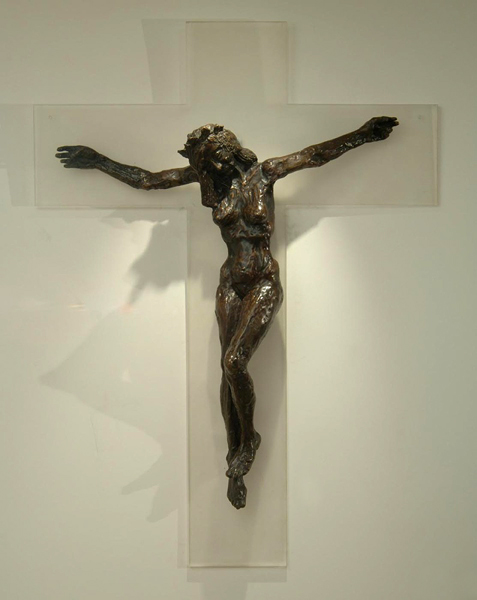 God of our mothers, Hagar, Sarah and Keturah, fold us under the shelter of your wings with all your children of every race and every faith. Amen.

Jerusalem, Jerusalem, the city that kills the prophets and stones those who are sent to it! How often have I desired to gather your children together as a hen gathers her brood under her wings, and you were not willing!

Jesus was doing the kind of preaching that few women or men do today, the kind of preaching that will get you killed. When some Pharisees come to warn Jesus that Herod is going to kill him he has to take it seriously. Herod is from a family where murder is a causal pastime. His father Herod the Great had murdered three of his sons, one of his wives and one of his mothers-in-law along with former friends and servants, and according to Matthew’s Gospel, he tried to kill Jesus before he was out of the cradle. (But Luke doesn’t seem to know that tradition.) Some folk believe the Pharisees were setting Jesus up, trying to get him to stop preaching and leave town with a fictitious threat. Others believe that the threat was deadly earnest because Herod was his father’s son and every bit as lethal.

However he understood the threat, Jesus looked at them and said, “Bring it!” Jesus told them to tell Herod he would be right there in Jerusalem whenever he was ready. Jesus knew that death was the likely, if not inevitable outcome of his ministry and he was ready. Even though he would have a reality check in the garden – no one wants to be brutalized, tortured, humiliated and executed, especially in front of their mama – Jesus would not back down; he would not run scared. As the Gospel of Luke presents the story, Jesus came to Jerusalem to die.

Jerusalem, the city of peace – Ir Shalom – never seems to have lived into its name, except perhaps for a few glorious golden years during the reigns of David and Solomon. The people of Jerusalem were Jerusalemites long before they were Israelites – in truth some of them never became Israelites. They were Canaanites. Thirty-five hundred years before the time of Jesus, more than fifty-five hundred years before our time, the people of what we now call Jerusalem were striking fear in the heart of Egypt. Then they were conquered by a Canaanite people the bible calls Jebusites. And David conquered them. David brought some measure of peace to Jerusalem before he died, but it was a bloody peace. He passed that fragile peace to Solomon under whom it withered and died from internal strife. Almost six hundred years before Jesus the Babylonians ravaged Jerusalem, the Persians liberated Jerusalem from the Babylonians but did not free it. They were followed by the Greeks and the Romans and alternating Christian and Muslim empires, then the Ottoman Turks and the British. Each wave of occupation was brutal. Jerusalem has long been acquainted with death. But that wasn’t the death Jesus spoke of in response to the warning about Herod.

Prophesying in Jerusalem could be dangerous because Jerusalem was a wealthy religious city. Wealth is not intrinsically evil but it can be seductive and corrupting as is the privilege it engenders. Jerusalem is where the monarchy and priesthood organized and institutionalized religion, leaving the prophets largely outside of the formal structure. For the Israelites Jerusalem was the only city that mattered, and theirs the only God or at least the only one that mattered. Preaching against empire, those who designed and implemented it and those who benefitted from it is dangerous, as is me preaching against the current manifestations of empire, white supremacy, wealth and privilege built on the backs of enslaved and exploited black and brown peoples. I don’t believe my fellow Episcopalians are likely to kill me but I know Episcopalians like other Christians have been on the wrong side of slavery and civil and human rights as well as on the right side.

Jesus knew that prophet could be a terminal occupation because prophet is also a religious vocation. Prophets don’t just have to worry about those who hold political power. Prophets have to contend with those who hold religious authority and are every bit as lethal. This congregation isn’t going to rise up and stone me if they don’t like my preaching but baptized and communing Christians are responsible for the Crusades and slave trade, the Holocaust, burning and bombing of churches, lynching, and now, the murderous martyrdom of black Christians in church at bible study and demonization of Muslims and Mexicans, some of whom have also been murdered. There is an ugly side to religion, including ours. Sometimes religious folk, Christian folk, are willing to kill or to die to prove a theological point. Jerusalem had a reputation for being the place where folk killed prophets they didn’t want to hear from.

The tradition of murdered prophets, particularly in Jerusalem was an old one by the time of Jesus. The author of Luke is seemingly obsessed by those murders; he mentions them four times including in Acts. The most outrageous murder of a prophet was that of the Zechariah ben Jehoida who was stoned at the king’s (Joash) command on the holy ground of the temple, (2 Chr 24:20-22). Two hundred years later Jeremiah tells of the prophet Uriah ben Shenaiah who preached the same things that Jeremiah did and was executed by another king, (Jehoiakim in Jer 29:20). The outrage that someone would kill a messenger of God, reject the word of God with lethal violence was so strong that stories of the murdered prophets found their way into the Quran.

God says in surah 5:70: Certainly We made a covenant with the children of Israel and We sent to them apostles; whenever there came to them an apostle with what that their souls did not desire, some did they call liars and some they slew.

And in surah 2:87: And most certainly We gave Musa (Moses) the [Torah] Book and We sent apostles after him one after another; and We gave Isa (Jesus), the son of Marium (Mary), clear arguments and strengthened him with the Holy Spirit. And, what, whenever then an apostle came to you with that which your souls did not desire, you were insolent so you called some liars and some you slew.

Love is at the heart of this lesson. Jesus opening his arms wide and sweeping us up and into his embrace. In choosing for himself the image of a mother hen collecting and protecting her brood Jesus gives birth to some of the most enduring imagery to shape the church’s prayer language.

I suspect that St. Julian of Norwich reflected on this passage when she wrote: …Christ is our mother, brother and savior…. Our natural mother, our gracious mother, because he willed to become our mother in everything, took the ground for his work most humbly and most mildly in the maiden’s womb… A mother can give her child milk to suck, but our precious mother, Jesus, can feed us with himself.

Some of us are unwilling to be mothered. And some have never been mothered at all. In the Gospel Jesus says, “How often have I desired to gather your children together as a hen gathers her brood under her wings, and you were not willing!” What does it look like to refuse to mothered by Jesus? At one level it means to accept a Jesus who troubles our notions of gender and sexuality.

An unmarried Jewish man was a scandal and a man without children was pitiable. As a Jewish man who would not have accepted the tradition of giving thanks for not being a woman, which came into Judaism from Greek philosophers as the gospels were being produced, Jesus offers a masculinity and a divinity that is neither patriarchal nor even androcentric in this text. But some want no part of that kind of Jesus; nor any kind of Jesus who doesn’t agree with what they agree with or hate who they hate. For some the bible’s androcentric grammar and predilection for masculinizing God has become an idol, so much so that folk would rather be unmothered by God than embrace God or Christ as our mother. Yet God is so far beyond gender that in scripture God has a womb, birthed the sea and fathered the rain – though the bible stops short of giving God male parts; no one gender can contain God. God is trans, transgressive, trans-gender, transcontinental, transnational, trans-religious. God’s love transverses and encompasses all things.

Our first lesson reminds us that Abraham is the father of many peoples, many different peoples. We don’t all have the same stories, memories or traditions. We don’t even share the same prayers or scriptures. But we do share the same God. The one God who is known by many names. We don’t all believe the same things about that God, not even in the Church, not even in the Episcopal Church. God is big enough to weather our disagreements. God is who God is whether we understand or accept someone else’s understanding of God. God doesn’t need us to argue or fight or prove who God is or isn’t. Our job is to bear witness, by loving as God loves – which though impossible for us is still a worthy goal.

The promise of God to Abraham is not for Israel only. It is for all of Abraham’s descendants. We are children of Abraham and the one God, whether Hagar, Sarah or Keturah was our foremother. The Hebrew Bible traces more peoples than I could reasonably count to Father Abraham including but not limited to the ancient Israelites and their Jewish descendants and the Ishmaelites and their Arab descendants. Those peoples have one father but many mothers; they are all our kin. Family has always been complicated. Some of us have more than one mother, some have had mothers who were fathers and fathers who were mothers. We were mothered by godmothers, grandmothers, aunties and big sisters. Their love was God’s love in human form as is Jesus. I have always had trouble with the trinity but Christ as brother, mother and savior makes sense to me. This is love incarnate.

The love of God for us is so deep and wide that there are not enough words or images in any language to tell it. Lent is an opportunity for us to reflect on and rest in that love. We relinquish things that that give us pleasure that we might take more pleasure in the love of God. We let go of things that distract us from the love of God. We take on disciplines and practices that draw us more deeply into the embrace of God’s wings. In the austerity of Lent it is a great comfort to find not a stern father but a loving mother. As we explore new patterns of prayer during Lent today’s Gospel is an invitation to embrace God in new language and different images as open, free and boundless as is the love of God for us.

When we come to the table, we dine on love. When we come to that table we are one. Our differences don’t disappear; they bear witness to our love which is not reserved just for folk who are like us. When we get up from our knees, there is a whole wide world that needs that love. Amen.