My farewell sermon at the African Episcopal Church of St. Thomas. (I decided to publish this unchanged because I believe this is a fit word for today.)

Let us pray:
My prayer is Miriam’s prayer, Mother Mary’s prayer – Let it be.
Let it be with your woman-servant according to your word.
With these words
the word of God was formed in the woman of God.
On this day, as on that day,
let your bat-kol, the daughter-voice of God
bring forth your word again. Amen.

This year things were tense. The Romans had staged a mass execution just before Passover. Yeshua ben Miryam – you know him as Jesus, Mary’s Baby, was handed over to the Romans for execution by the Judean religious authorities on the eve of the OG, old school Paschal feast, casting a shadow over this joyous time. Shavuot, Pentecost, was supposed to be a time of celebration rejoicing in the fact that God had sent forth God’s spirit and renewed the face of the earth. It was the sweet spot between springtime and summertime. Crops were being harvested and there was an abundance of fresh food. Passover had a serious underpinning, but Pentecost was pure joy.

Passover marked redemption from slave labor. Pentecost was marked by rest from honest labor. Passover memorialized a bitter harvest with the bread of affliction. Pentecost memorialized the new harvest with its first fruits. Passover commemorated the procession out of Egypt and the death of their firstborn. Pentecost was commemorated with a procession of newborns as the first fruits of their families. The Passover table was set with hard, flat, unleavened bread, bitter herbs and salt water. The Pentecost table was set with fresh baked goods from newly harvested wheat and barley, fresh, ripe olives and fresh pressed extra virgin olive oil, fresh sweet grapes and new wine.

It was one of the three great pilgrim festivals when everyone who was able traveled from wherever they were in the world to bring their gifts to God in Jerusalem. It was like Thanksgiving with in-laws and outlaws crowded into family homes and inns and elbowing each other at the table. The traffic was terrible, especially around the temple. You could hardly get two donkeys side-by-side down the street. The festival was so important that even when Paul was traveling around the world spreading the gospel the next year in Acts 20:16, he stopped and came back to Jerusalem to observe the feast. It was an old, old feast, but in our lesson it was about to be given new meaning.

Something old, something new. As that something new prepared to come forth, the air was thick with tension, but tension isn’t always a bad thing. Sometimes tension is creative, generative, giving birth to new life and new expressions of life. Sometimes tension is anticipatory. Acts chapter 1 says waiting in that tension was a community of about 120 folk that were in an upper room. There were 11 disciples who had become apostles, there was the first family: the Virgin Mother, the sisters of Jesus, and their four brothers. The rest of the crowd was made up by “certain women” along with, perhaps, the two candidates for the open apostle position violently vacated by Judas.

On that day when the old festival acquired a new meaning, the breath of God blew a new fire from heaven fueled by an ancient and eternal power and stirred up the old gifts of the apostles and disciples and gave them new ones. At the intersection of heavenly fire and human speech the Church that is Mother to us all came into being. Her birth cries were the voices of women and men prophesying as Joel prophesied they would.

The power of Pentecost was a new force in the world but its instruction manual was an old stand-by. Peter was in position to announce the birth of the Church because he was in the house and because he was in the scriptures. Peter knew that he was seeing the word of God come to life all around them because he knew the word of God. Peter was able to do what God called him to do because at some point in his life he had put some time in the word. Peter’s prophetic preaching is also a reality check for the church; a prophetic church needs preaching that is in the word. The women and men who were empowered by that Holy Ghost fire went into the word and traveled with the word and preached from the word to build the church.

But lastly and most importantly, the folks who became the first Church were transformed by the power of God to be the Church that God designed to meet the needs of the world. The Church that God birthed in wind and fire was born to be a prophetic church. It is no accident that Peter turned to Joel who once prophesied that we would all become prophets as Moses once prayed. Joel makes it clear that we are all called to prophesy. I know some think that being a prophet is all about predicting the future. I know some think that prophetic preaching is the call of preachers like Peter and priest like me. Ah, but the God who knows what the church needs sent the African Episcopal Church of St. Thomas one of the world’s foremost experts in prophecy eleven years ago so that I could tell you this:

There is more than one way to be a prophet and the church needs them all. Prophets stand between God and the people bringing God’s word to the people and the people’s words to God like Moses, prophets lead the people from slavery to freedom singing new songs and dancing new dances like Miriam. Prophets demonstrate the power of God doing things that no one else can do like Elijah and Elisha. Prophets protect the people and when the enemy comes against the people of God, prophets take up arms to defend them like Deborah. Prophets whisper in the ears of Queens and Kings, Presidents and Prime Ministers, whether they listen or not like Mandela and Maya. There were scholar prophets like Huldah who knew more of the word of God than any man around her. There were social justice prophets like Micah and Amos and Martin and Malcolm. There were praying prophets and prophets who saw visions and prophets who dreamed of a better world.

Oh but I hear you saying God didn’t call me to preach or lead the people. I’m going to just set here on my pew and let the priests and pastors do all that prophetic work. You don’t have to be a priest or pastor to cry out against injustice. The black church has always been a prophetic church not just because of its leaders but because of its members. You have the same power as the ordinary women and men in that upper room. You have the same holy fire fueling you and your voice.

The God who blew the breath of life into the nostrils of the first human handcrafted from the wet clay of earth, the God who exhaled and the Red Sea parted, the God who read a benediction down on a baptism in the river Jordon, that same God blew in and through that house. The breath of God blew on those disciples and they caught fire like kindling. It was a fire that burned but did not consume, just like the old, old story of the burning bush. Here was something old and something new. That holy fire was only visible for a time but we know it remains by the power it generates.

The power of God that transformed women and men and boys and girls, rich and poor, slave and free, Jerusalem Jew and Arabian Arab into the church was the same power that raised Jesus from the dead. That Holy Ghost fire was the same fire that burned a bush on Sinai and did not consume it. The wind that swept through the house was the same wind that blew open a pathway through the Red Sea. The God who set the Church on fire on her birthday is the same God who set the sun blazing in the heavens. The fire of Pentecost is something old and something new.

But we have the same Jesus in this old world: Jesus who demonstrated beyond all doubt that he was God in the flesh: even if anyone doubted the stories about his conception and birth they had seen for themselves when he multiplied meager meals and walked on water. They were with him when he opened blind eyes, unstopped deaf ears, loosened stilled tongues, dried up bloody flows, unbent crooked spines and restored diseased and paralyzed flesh. They were in the procession when he canceled funerals and raised the dead while they were lying in their coffins. We have their stories of Jesus because they didn’t keep them to themselves.

Jesus, the embodiment of God’s everlasting love in a new package used the old words of the holy Scriptures to proclaim the love of God, the life God gives, abundant and eternal, the liberty God gives even to people under the tyranny of an evil empire. It is the same old world but God’s mercies are new every morning. There is new life everywhere we look. Babies are being born and being baptized. People are finding new life with God in Christ, in the Church. Some are finding new life in a new world of sobriety. Even the earth in the city of Philadelphia is giving birth to new life now that spring has finally sprung.

This city, this nation and this world needs the Holy Ghost fire of a prophetic church. That is what Pentecost is calling us to be, a prophetic church. Peter returns to the old, old scriptures of their shared faith to interpret the events that were unfolding around them. He sees in the prophet Joel God’s vision for the church. He sees the church as a community of prophets. Prophets are more than preachers; they are folk who speak with and for God. There was a time when the black church was known as a prophetic church because we used our voice, our gifts, our power to speak out against that which was wrong and to speak up for those who could not speak for themselves. The world still needs the black church. The Pentecost model of church is one in which every one of us woman and man, girl and boy, old and young, well off and struggling to get by, take to the streets empowered by that Holy Ghost fire to change the world. The power of the Holy Spirit, the word of God in the heart and in the mouth of the believer are a fire that cannot be extinguished.

Prophesy church. Prophesy. Bring the words of scripture to pass in your mouth. Show the world the power of God in your life because God has poured out God’s Spirit on us all and we are the Church of God, new life in this old world. Amen. 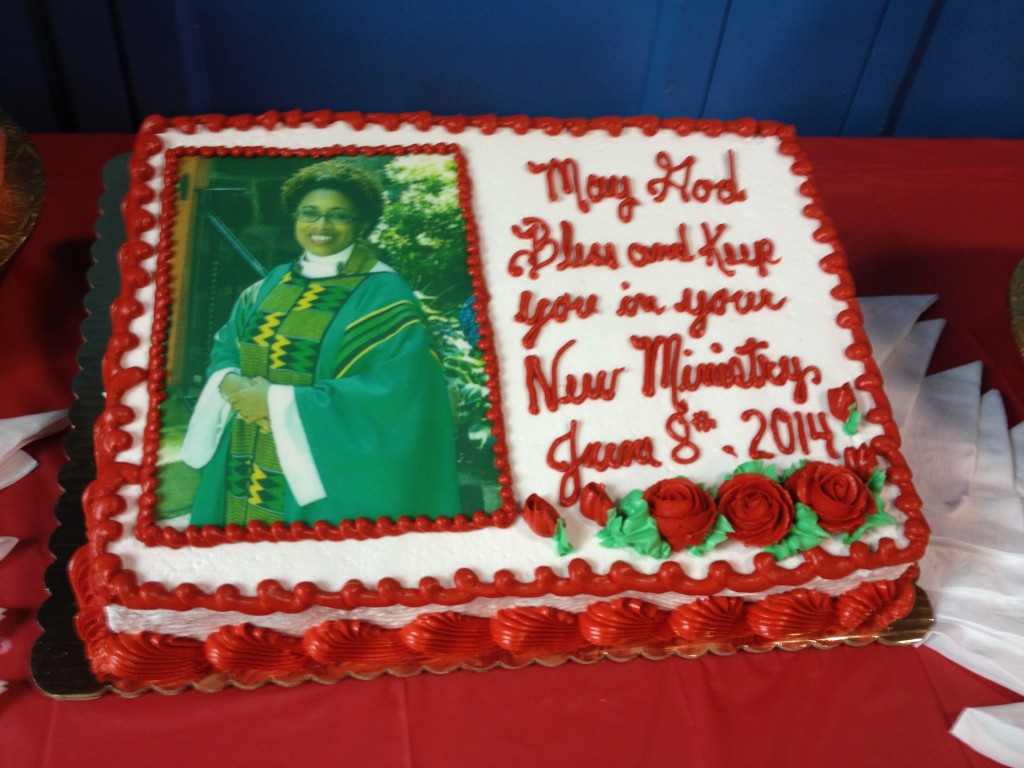