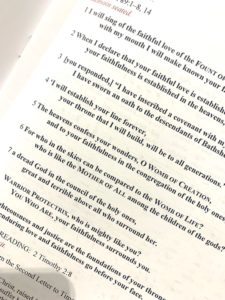 2 Timothy 2:8 Remember Jesus Christ, raised from the dead, from the line of David [and Bathsheba]; that is my gospel… (Proper 28 Year W)

In the name of God: The Author, the Word and the Translator. Amen.

On October 28, I had the privilege of being seated and installed as the Right Rev. Sam B. Hulsey Professor of Hebrew Bible at Brite Divinity School due in part to the generosity and faithful stewardship of Episcopalians and non-Episcopalians to remember Bishop Sam. Having lectured from the previous week’s readings in A Women’s Lectionary for the Whole Church, (Year W), I ended my inaugural lecture with a quote from today’s epistle: Remember Jesus Christ, raised from the dead, from the line of David [and Bathsheba]; that is my gospel…

Let us pray: Holy One of Old, teach us to see Jesus, hear Jesus, know Jesus, love Jesus and, remember Jesus in all that we do and say. Amen.

I have spent the better part of the last year thinking about what it means that Jesus is the Son of Bathsheba as well as the Son of David. For many that may be a strange and new thought, after all, the “begats” in scripture are nearly always written from father to son – but not always. He begot him and he begot him and he begot him. Yet we all know that is not the whole story. None of that begetting happened without women. Not even the most miraculous conception and pregnancy happened without a woman, it was the man who was expendable in the divine workaround.

But as soon as we add the names of the women to the stories of scripture, things begin to get messy. Not because women are or were messy. But because of the ways in which these men treated women: enslavement, polygamy, disenfranchisement, abduction, rape and murder. The Digital Age is not so far removed from the Iron Age as we might like to think and believe. So if we just name the men we don’t have to contend with these ugly truths. But the gospel does not hide from ugly. Rather it is constructed from and in response to some of the worst things human beings have done or will do. If we did not tell ugly stories we could not truly remember Jesus and his gospel.

Yet we are living in a time when folk don’t want to tell the truth. The truth about the present or the truth about the past. They don’t want to tell ugly stories. They don’t want to teach children the ugly truths of who we have been and sometimes who we still are. Perhaps they want to pretend that there is such a thing as an America without genocide and lynching and race-based enslavement and discrimination. There are folks who love to quote Dr. King but apparently don’t want to discuss the circumstances in which he rose to prominence as the conscience of the United States. How would they explain his dream or his hopes for his four little children without describing the ugly reality of the world in which he lived?

Names are powerful. How we name ourselves, each other and God is also powerful, giving voice to parents’ prayer and prophecy for who their children will be, creating theological frameworks and constructs in which we see and sometimes seek to imprison God and, in some cases, deny the full humanity and divine creation of others. All with a word, imposed or withheld. We honor and bless with titles before some names and sometimes injure and disrespect by failing to honor names and titles and pronouns.

There is some disrespectful naming in our first lesson that is not obvious without the help of a Hebrew speaker or reader. In the text, the Queen Mother is called “Zeruah” which sounds lovely but it is a slur. It means “diseased woman.” Yet there is nothing wrong with her. It is a high cotton insult, calling her son, the new king of the recently divided nation, a “son of a [fill in the blank creatively].” They were saying, “he is nothing but the son of a diseased woman, bad seed from the beginning, the corrupt fruit of a rotten womb.”

Calling someone out of their name is one of the worst things one can do to insult and dehumanize a black person in African diasporic culture. Indeed, the stripping of names, language and culture was the first of many steps to break down a person created free in the image of God into a commodity. Some of us live with the legacy of that misnaming in perpetuity. There is no family, tribe or nation named “Gafney” in West Africa where my African roots lie. Because so many of us wear a slaveholder’s name, some created names for their children from the only language they had left. And when those names deviate from the English and Christian naming tradition of their ancestral enslavers and their descendants, they found themselves mocked for creating a whole new lexicon of names.

Some of us have even dared to name God. Hagar the enslaved African, Egyptian, girl is the first and only person in the whole of the scriptures to give God a name. She is the spiritual mother of black folk and Womanists in particular. She is also the great mother of Islam. When we name God, we tell on ourselves. We reveal our theology, our perspective on the world and each other. When we name God as the God of Abraham, Isaac and, Jacob, we tell one story. When we name God as the God of Hagar, Sarah, Abraham and Keturah, as the God of Rebekah and Isaac and, as the God of Rachel and Leah and Bilhah and Zilpah and Jacob, we tell another story – if we even bothered to learn the names necessary to tell that story. We tell a truer story.

The Psalm in today’s translation offers many ways to name God, to tell the story of her faithfulness to the whole earth and all her peoples across time. It does so with a less familiar and quite frankly, otherwise unheard, pronoun. It does so recognizing God does not have a biological gender anymore than do houses and fields and tables and chairs, all of which have grammatical gender in biblical languages. And it does so so that women and men and non-binary folk, children and adults, will hear and experience a God who resembles the women and girls we say are created in God’s image, sharing the same language and yes, pronouns.

Gendering God unconventionally and, naming the women, wives and, mothers, sisters and aunties sidelined and obscured in the scriptures does not fundamentally change them, but it does fundamentally change how we hear them and it tells us something about ourselves. There will be those who will find telling the complete story unnecessary, impractical and undesirable, inviting reflection on how we can live the gospel and claim to share and show it with and to the whole world when we find one half of her people bothersome, extraneous and unnecessary.

In all four Gospels I find a Jesus remembered who looks more like the son of Bathsheba than the son of David. Jesus chose to spend his time with women who had ruined reputations like his mama and his many greats grandmother Bathsheba. He lived, laughed, loved, ate, drank and partied with sex workers and crooks and swindlers. He didn’t carry himself like a royal heir expecting people to bow and scrape to him. Rather he positioned himself as a servant, as a slave in the language of the scriptures, at people’s dirty encrusted feet. At tables and in houses where the good and proper folk wouldn’t dare be seen. With women like Bathsheba.

And even though Bathsheba did nothing wrong she would’ve been judged and blamed as women in any age who survive sexual violence. Indeed, many in the church have made her out to be an adulteress even though neither God nor scripture nor the prophet Nathan charge her with any transgression. She is remembered for the worst thing that ever happened to her and how the broken pieces of her life were put back together and how something good came out of the evil that was done to her. It’s also important to note that God did not need or require anything that happened to her to bring about God’s plan of salvation and redemption. God never requires our harm. God simply wove those ragged and frayed strands into something more beautiful than could have been imagined. A beauty that is all the more because we know the ugliness that was transformed at the heart of it.

Jesus was the son of a woman with a bad reputation like Bathsheba. Everyone knew some version of the story and I’m sure most got some if not all of it wrong. You cannot keep family secrets that big. Surely the neighborhood gossips knew that there was at least a question as to the paternity of Mary’s baby. Some probably knew that Joseph almost called the whole thing off. Some early manuscripts of Mark have Jesus being described as “the son of Mary” signifying he didn’t have a father or didn’t know who his daddy was. It was an insult to him and to his mama.

The epistle calls us to remember this Jesus. To remember him, we have to know him, who he was, truly and fully. The epistle calls us to remember his death and resurrection. But that is not the whole story. There is also his life. Today’s gospel gives us a slice of that life. We often read this text focusing on the miracle, this first public display of the awesome power of God that was within him and his to command. But it is also a moment in his life, a fully human life. This is a very human moment where Jesus is being a good friend and neighbor and party guest. He’s also a mama’s boy, in the best sense. He’s at a party hanging with his mama bantering back-and-forth about what to do in the face of the existential crisis that was not enough wine in the midst of a get-down community celebration.

For years I heard his question to his mother as harsh and almost disrespectful: “Woman, what does that have to do with me?” Someone pointed out to me that we are not used to hearing the term “woman” as a term of endearment. Women are presented in the Scriptures very narrowly, as a problem, as a problem to be fixed or healed, as a bad example. I now hear his question in very playful terms. “Woman, what does that have to do with me?” Mary knows her boy and like many mothers she doesn’t even engage his question. She might have even shushed and swatted at him. She just turns to the waitstaff and preaches her gospel, “Do whatever he tells you to do.” That’s how you remember and follow Jesus. Do what he says. Follow his teaching and example.