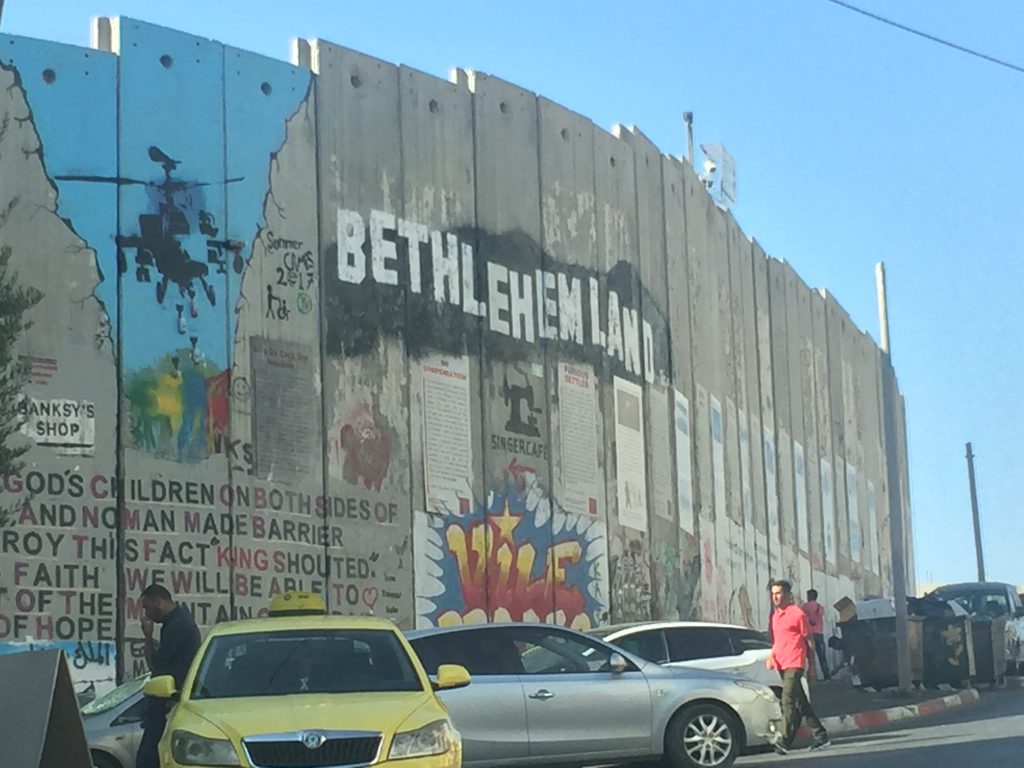 Today my friend and colleague took me on a tour of the wall around Bethlehem. The Israelis I spoke with on the interfaith listening trip said often only five percent of the wall—they prefer security fence or barrier—is a wall; the rest is a fence. In Bethlehem they say one hundred percent of the barrier around the city is a wall.

I had a much more emotional response to what I saw and the narrative I heard here in Bethlehem. I am not a disinterested reporter. The plight of the Palestinian people living under occupation touches me deeply. Here I resist saying what in the Israeli narrative touches me. There is no competition. There is no binary. There is no parity. And I believe the impulse, and often demand, to treat each side the same in discourse disregards the hierarchical nature of the relationship and engagement between the two peoples.

There is a kinship between black people and Palestinian peoples that stems from our origins on the same continent and similar experiences of occupation and justice struggles from apartheid to the Black Lives Matter movement. It is a common understanding that (former) Prime Minister Sharon went to South Africa to study apartheid and imported the bantustan system to Palestine.

The wall represents a craven land grab to the Palestinian people. One that is continuing. The wall is being rebuilt, moved, to take more of Palestinian land. By some accounts, eighty six percent of Bethehemite (mostly Christian land) has been walled off on the Israeli side. The wall is often right against people’s houses, cutting them off completely from their land, or immediately adjacent to the road with not even a sidewalk. Even though they are still the owners of some of that land on paper, they are not allowed access to it and when their olive trees fail and the land lies fallow it is often seized. The Bethlehemite lands become available for the Israeli settlements that are growing right up to their newly imposed borders. 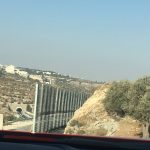 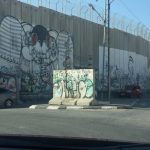 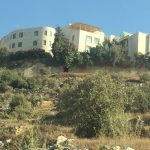 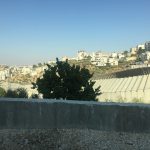 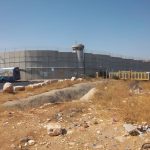 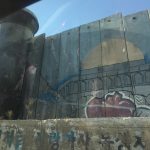 The pastor I spoke with lamented that this generation of children don’t know the green Bethlehem of his youth. Every square (remaining) inch is built on and build up into multi-story buildings because they can’t expand sideways. There is real concern about the impact of walling so many people in with increasing population, static or reducing space, and increasingly limited employment opportunities. These mechanisms of the occupation are systemically violent and often neglected when physical mechanical violence by individual Palestinians is condemned. Violence takes many forms here. Even so, my colleague calls for creative and non-violent resistance, not violent resistance. He sees no victory in using the sword of the empire and enriching arms dealers. 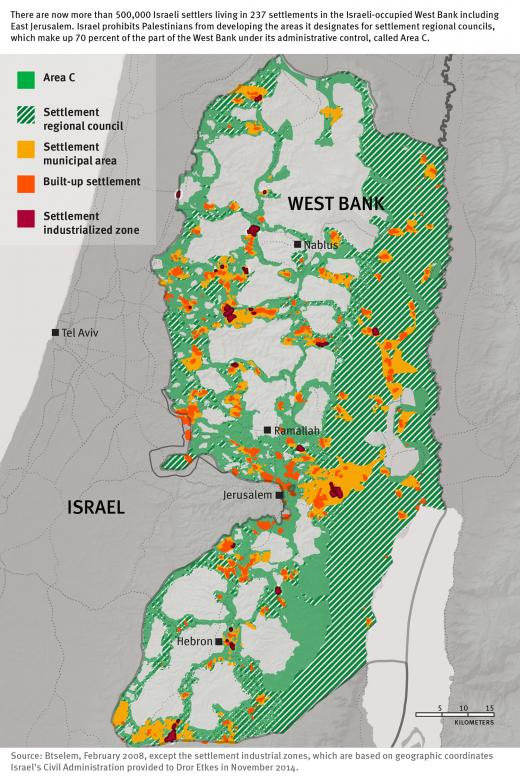 We talked about what the future might bring. There is little belief in a two or even one state system anymore. He raised the possibility of a three or four state eventuality. Israel, Gaza, the West Bank and, perhaps a settler state in the middle of the West Bank. According to Human Rights Watch [map], there are some 500,000 settlers in 237 settlements in the West Bank. They are connected by private bypass roads that bypass Palestinian towns and villages, living them a singular footprint.

Our talk and tour did not leave me with a lot of hope for the future. Survival and endurance are the order of the day. And in the midst, finding beauty and joy, living as fully as possible, and resisting the occupation and proclaiming its evil to everyone who will listen.

I have my loved my time here in Bethlehem’s Old City where I can’t see the wall and there is an underground water tank so we don’t suffer water shortages from the rationing.

Today at the Church of the Nativity, some young Palestinians asked me if would record a statement supporting freedom of movement for Palestinian people. I did. Freedom of movement. The ability to leave one’s home town to marry, work, go to school, shop, or travel the world. That people should have to ask for this basic human dignity angers me. I bear witness to these stories and think of the passes my enslaved and free ancestors needed to move about, the ghettos into which Jews were walled in during World War II (with a special irony), native peoples herded on to reservations in the US, and apartheid.

And now, we are talking about building our own wall… 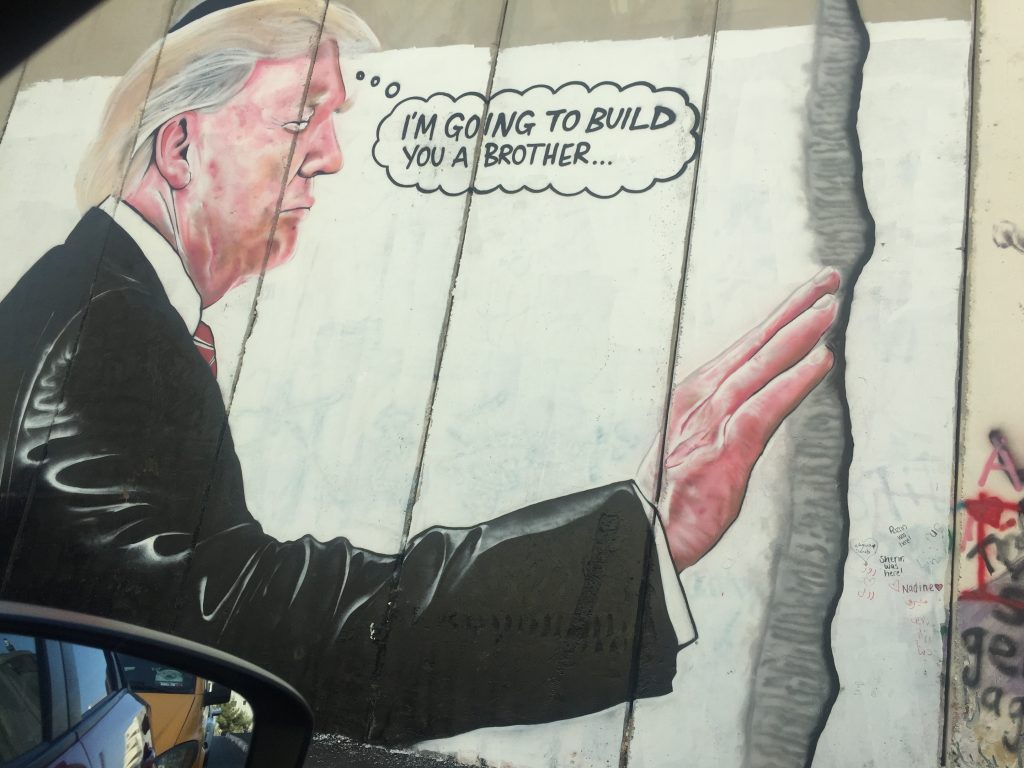