Torat Bilhah: The Torah of a Disposable Woman

Torat Bilhah: The Torah of a Disposable Woman 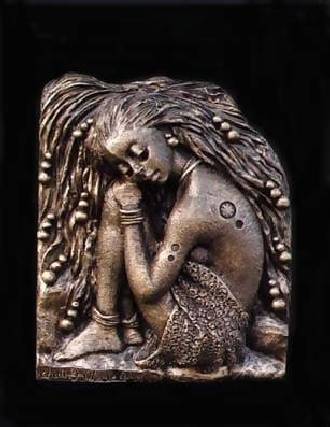 [This D’var Torah led to a rich and ongoing discussion at the Dorshe Derekh Reconstructionist Minyan of the Germantown Jewish Centre in Philadelphia on the possibility of adding the names of the enslaved Mothers, Zilpah and Bilhah, to the liturgy. Some of that conversation can be found here. Ultimately it was decided that prayer leaders would have the option to invoke their names as Immahoth, Mothers of Israel.]

Today, I’d like to share with you Torat Bilhah, Bilhah’s Torah, the torah of a disposable woman. Today’s drash is based on an excerpt from my forthcoming book, Womanist Midrash. Womanism is black feminism by another name, coined by Alice Walker.

Genesis 30:3 Rachel said, “Look! My womb-slave Bilhah – come in her, and she will give birth on my knees that I may also build-babies, through her.”

Bilhah is one of two slave-women whose bodies were used to produce a full third of the twelve tribes of Israel. Bilhah and Zilpah are often overlooked – in prayers naming the matriarchs in Judaism and Christianity – and, in my experience as a congregant and student they are combined as a footnote to Israel’s story. Bilhah figures more prominently in the scriptures than does her sister in slavery, Zilpah. There are eleven references to Bilhah; in comparison there are only seven for Zilpah.

Both amahoth and shiphchoth are enslaved women or girls regularly associated with sexual and reproductive duties. Translating either as “maid” intentionally obscures the sexual nature of their servitude. Both terms seem to refer primarily to foreign women; Lev 25:44 stipulates that they should be bought from foreigners. However, a survey of the passages in which these terms occur does not indicate that these women are entirely or even preferentially non-Israelite.

In some cases I translate amah and/or shiphchah as “womb-slave.” In these cases, the girls are given by other women to men for sex for the express purpose of impregnating them. I believe that it is more appropriate to describe the womb-slaves as girls rather than as women because they were likely young enough to have been presumed fertile and possibly virginal in order that the paternity of their children not be disputed, however, it may be that in some cases, perhaps Bilhah’s, that they were already proven fertile. Bilhah is first enslaved to Lavan the father of Leah and Rachel before being passed on to his daughter Rachel. While she is enslaved to Lavan, Bilhah is initially referred to as a shiphchah. Later, she is called an amah. The two terms are used nearly interchangeably in the Hebrew Scriptures although there was likely once a distinction between them.

The text is not interested in how a girl (or woman) young enough to be presumed fertile came into Lavan’s household. Was Bilhah once the woman-servant of Lavan’s mysteriously missing wife? Was Bilhah born in captivity or captured as spoils of war? How long was she in Lavan’s service before he gave her to Rachel? And what sorts of services did she provide Lavan? Given the absence of Lavan’s wife from the narrative it is entirely possible that Lavan used Bilhah sexually.

Bilhah’s sexual subordination to Rachel (with or without the possibility that Lavan used her sexually previously) evokes for me the sexual abuse of enslaved Africans in the United States, Caribbean and other places. Religious readings that valorize Rachel place the descendants of those held as chattel in the American slavocracy in the position of identifying with slave-holding values and against the interests and experiences of our foremothers. Rachel, like her foremother Sarah does not to hesitate to use the body, womb and sexuality of another woman for her own purposes. Unlike the white women who benefited from slavery in the Atlantic, Rachel does not pretend not to know about sexual contact between her man and her slave. And, when Rachel gives Bilhah to Ya‘aqov, she gives her as a primary wife, an isshah. Yet Bilhah remains Rachel’s slave; she is regularly referred to as a shiphchah. Bilhah proves fertile and gives birth to Dan and Naphtali.

In each slave-surrogate story the text portrays a singular accounting of the sexual contact between Avraham and Hagar, Ya‘aqov and Bilhah and Ya‘aqov and Zilpah. The reader must imagine how many times the slave-women were forced/required to have sex with these men in order to provide their mistresses with the children they craved. Rachel like other women who use their slaves as child-bearing surrogates claims the children; this is not comparable to the vast experience of enslaved women of African descent forced to bear children at the whim of their enslavers, whose children were sold off or abused to punish them for a sin that was not theirs. (Perhaps a modern parallel to Rachel’s use of Bilhah’s body might be the women of privilege who travel to the two-thirds world to pay a surrogate to bear their children at a tenth of the cost of an American surrogate. While the poor women do consent to the practice, the financial disparities and cultural consequences of carrying someone else’s child in traditional societies complicate that consent.)

Bilhah’s body is used again in Gen 35:22. Re’uven ben Leah, Ya‘aqov’s firstborn son, rapes Bilhah. That Bilhah does not consent is indicated by the Hebrew, vayishcav et-bilhah, “he lay Bilhah.” There is no “with” indicating consent. Bilhah is the grammatical and sexual object of Re’uven’s actions. Re’uven is young enough to be her son. He may have been like a son or nephew to her. But he uses her nevertheless, whether for his own power and control needs or as a pawn in a battle with his father. The pain, anguish, rage and shame that Bilhah must have felt are and are not difficult to imagine. No punishment is meted out to Re’uven in the text at the time of the assault. (It is held against him and eventually given as the reason he is demoted from the privilege of being the firstborn.) No comfort is offered to Bilhah in the text. Was she supported by other slave women, by Zilpah who shared her lot in life? I cannot imagine Rachel or even Leah coming to her aid. Her body has belonged to Lavan, Rachel, Ya‘aqov and now Re’uven. Bilhah may be the woman with the most sexual partners in the scriptures, none of whom she chose. In the rape narrative Bilhah is described as a secondary wife, a pilegesh. She has been degraded in body and status.

Yet something of Bilhah endures and transcends the abuse heaped on her body. In 1 Chron 4:29 there is a town named Bilhah settled by the descendants of Simeon. Textually speaking, the town is likely the same town called Ba‘alah in Joshua 15:29. Since Ba‘alah and Bilhah are more than one letter apart, scribal error does not seem to be responsible for the discrepancy. There are likely two different traditions about the ancient city list. The space between the two traditions provides a midrashic space. I’d like to think that Bilhah is the Ba‘alah, (“lady” or “mistress”), for whom the town is named, regaining the dignity that had been stripped from her. Finally, in Genesis 46:23-25, Bilhah takes her place in the genealogy of Israel as a matriarch, credited with seven children and grandchildren; this is largely repeated in 1 Chron 7:13.

There is a prayer in the Mass of my church, (Eucharistic Prayer C in the Holy Eucharist, Rite II, in the Book of Common Prayer of the Episcopal Church), in which the celebrant invokes “God of our Fathers, God of Abraham, Isaac and Jacob.” I always add Hagar, Sarah, Leah, Rachel, Bilhah and Zilpah. Because Bilhah is one of the mothers of Israel and after all that she has been through – after all that was done to her, to erase her name from the chronicle of her descendants and their people is to do further violence to her. Likewise when I pray the Amidah, I add Hagar, Bilhah and Zilpah for the same reason.

Lastly, calling the names of familial and spiritual ancestors is a womanist practice with roots in a number of African societies. In ritual practice, the affirmation “Ashé!” from the Yoruba tradition concludes the name-calling of the ancestors. Mother Bilhah, womb-slave of Israel, we call your name. Ashé!

Who are some of the marginalized characters in sacred writings that you would like to see in the center of discourse? Given that this text functions as scripture – with all that entails – what torah does Bilhah offer you? What (if anything) does midrash from the margins offer the broader interpretive tradition? I welcome your questions and comments.