What’s A Sista Got to Do? 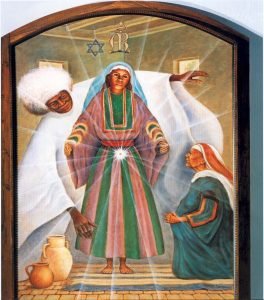 What’s a sista got to do to be respected in these androcentric man-besotted religious streets? Spontaneously reproduce without pleasure or pain (according to some traditions), never have sex (according to some), get bodily snatched up into heaven and avoid death (another tradition)? What on earth, in and under heaven are we doing with Jesus’s mama? Past generations of churchly men piled all their fear and loathing of women and, their desire for women and sex onto and then off of the Blessed Virgin by making her chaste before and after her miraculous conception, birth-giving and even marriage. Let a sista have an orgasm.

Judith 13:18 Uzziah said to Judith, “O daughter, you are blessed by the Most High God above all other women on earth, and blessed be the Holy God, who created the heavens and the earth, who has guided you to cut off the head of the leader of our enemies. 19 Praise of you will never depart from the hearts of women and men who remember the power of God.

What’s a sista got to do to be remembered by name in these androcentric man-besotted religious streets? Kill a man with his own sword, hack at it a bit because the spinal cord is tough, throw the head into your kosher lunch bag and sneak out of enemy territory. Even with all of this, the minor but louder tradition of Christianity, Protestantism, cut a sista out of their Bible with a quickness. The rest of us, the majority of Christians on the planet, still have Judith and her blessing that was reworked to bless the young unexpectedly pregnant virgin Miriam from Nazareth. (Or was it Ya’el’s blessing after she ghosted that rapist by penetrating him in his tender flesh? What’s a sista got to do to remain unmolested in her own damn tent?)

What’s a sista got to do to construct a holy, wholly healthy humanity (with room for horniness) out of the crumbs – crumbs under the table and crumbs that as Sista Macy (Gray) testified, “your crumbs of lovin’ no longer get me by?” Is there anything in the idolized manmade Virgin that speaks to a woman in this world of sex-positivity, gender plurality, trans bodies, frustrated angry celibates, guilt-ridden lovers, bad church teaching and worse preaching?

Deconstruct the BVM and reconstruct her in her image. It’s Ok. We’ve been doing it all along, ironically, following the in the footsteps of those old churchmen but wandering along new paths and carving out yet more.

Today I see in her, rebellion and resistance. Rebellion and resistance to family and societal and even theological norms that told her what was going to happen to her body. When she opened her mouth to question the announcement that was made to her, she took ownership of her body and her future. And to no small degree, mine.

What’s a sista got to do to stay in a androcentric man-besotted Church without losing her ever-loving mind? Have looong talks with the Ever-Blessed Virgin Mary about these men and their mess.