“Preach Woman! Preach!” is the call and response of womanpreach.org, a theological educational community that trains and nurtures preachers in programs and cohorts for black women, persons of all genders, men and, all persons to authentically proclaim a justice-centered faith-full Word in partnerships with fully accredited seminaries and universities. 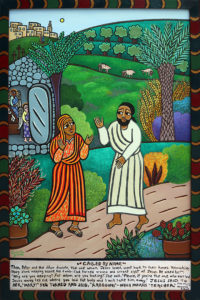 In my sanctified imagination, I hear Jesus telling Miryam of Migdala, “Preach Woman! Preach!” It wouldn’t be the first time, (quoting Alice Walker’s definition of womanism in a very different context). I also heard him say it to the Samaritan woman in the space between the 26th and 27th verses of the fourth chapter of John; the sanctified imagination is an ancestral black homiletical and exegetical space where the blood, bone and sinew of the scriptures are fitted with skin and style and swag.

Mary Magdalene, like a lot of black women – Israel has ever been on the land bridge between Africa and Asia and, on the African side, on the tectonic plate that meets the Asian plate in the Jordan River – Mary Magdalene, like a lot of black women has been made out to be whatever people wanted and needed her to be. Today, she is a saint of the church. In Orthodox Christian traditions, she is the Apostle to the Apostle, an epithet embraced by many womanists and feminists outside of the Orthodox tradition. I proclaim her Matron Saint of Women Preachers, although the same claim could be made for her Samaritan sister rendered anonymous, or for Miriam or Deborah or Huldah or, women we were never permitted to know.

Mary Magdalene is a woman for whom a condemnable narrative of sexuality was constructed lest she and her memory be too powerful or, she empower the women who revered her to walk in her footsteps – or run like her Samaritan sister – and proclaim the gospel of the risen Christ. Like all the women named Mary in the New Testament save, perhaps, for the Ever-Blessed Virgin, she is barely distinguishable from a literary conglomeration of women who non-the less demonstrate the enduring legacy of the prophet Miriam in their naming and even in their misremembering.

In every year of A Women’s Lectionary for the Whole Church she is remembered with Hagar – a woman who invented new language about God, for God, to God, based on her own black woman’s perspective and experience, with the army of women preachers in Psalm 68:11/12 (the varied translations are a primer in predominately masculinist biblical translation); she is remembered with the Apostle Junia, in spite of the many attempts to erase her and, with the other female church leaders of Romans 16 and, in John’s telling where she is limited to “announcing” to keep her from “preaching/proclaiming” that very good news.

Even without “preacher” and “apostle” spelled out, the scriptures yet leave enough crumbs to confect a living Word in which she is: