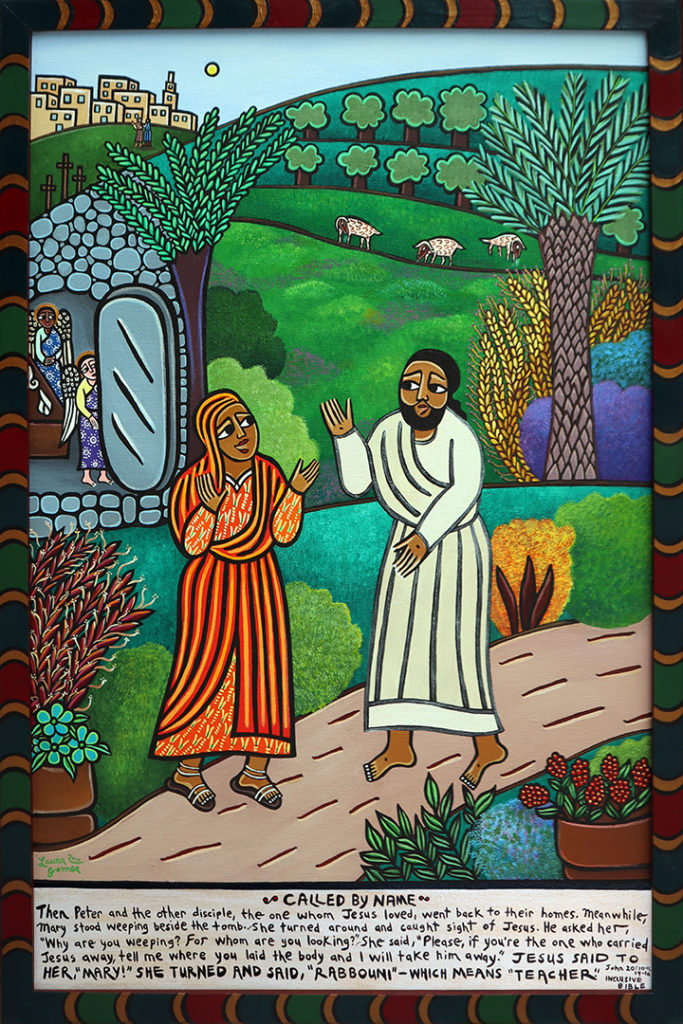 Mary Magdalene came to the tomb alone, knowing that she was likely to be alone once she got there. No one publicly grieves a failed messiah. Except perhaps, for a woman who is called a sinner in public and a whore in private and sometimes the other way around.

Mary saw that the tomb was open. She thought the tomb had been desecrated, the grave robbed. She went to Simon Peter. Perhaps because he was most likely to bust some heads and find out what had happened. She also went to the anonymous beloved disciple. Perhaps to make sure Peter didn’t go too far.

In this account, Mary does not go into the tomb. She sees the state of the grave then runs. Why doesn’t she go in? Still believing that his grave and perhaps his body had been desecrated again, desecrated more, perhaps she just could not bear to see the evidence up close. The two male disciples look and leave and go home rather than look for Jesus and whoever might have taken him; Mary returns to the grave. She stands outside and weeps. Just moments ago she thought her grief could not grow any deeper. She was wrong.

Steeling herself to see the detritus of the tomb, she bends down to look inside and see fully inside. And sees angels on the mortal plane. And then… And then… And then, she sees Jesus. Jesus who is still Jesus when we do not see or know him. Jesus who loves us and cares for us as only he can even when his love shines through a stranger’s eyes, another’s touch, a neighbor’s care and comfort.

This intimate moment between a woman who is not ashamed to love and stand by Jesus even in his scandalous death. A death designed to terrorize and disrupt the movement and make it too expensive in life blood to continue to follow Jesus. But she stayed when all the others left. And Jesus who was never ashamed of her in life was not ashamed of her in death, death transformed into life. He was not too busy being the risen Savior to share a moment with her. A moment that could only be a moment and perhaps that is why he told her not to hold onto him. Perhaps, they both knew if she embraced him she would never let him go.

This year as in every year we embrace the risen Savior and the Gospel of Mary Magdalene in a world that still crucifies the sons and daughters non-binary and trans children of God. Our gospel is the only gospel we have, that Jesus transforms death into life. In the grave and beyond the grave. In this world and in the next.