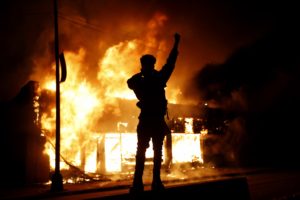 What does Pentecost look like when the world is on fire? A rushing wind. Does it blow out the flames or does it whip them into and even more furious inferno?

What meaning does the ancient imagery hold today, human tongues forked like fire? What are those tongues saying? To whom are they speaking? Who can even hear or understand them in the roar of the flames?

I say forked tongues instead of divided tongues because some of those tongues are serpentine.
The assembly is in the street. There is no church house. The temple is there but it serves another purpose. (Too many people conflate church and temple.)

Today’s fire is not metaphorical. Neither is the presence of the spirit. She is there, in those flames, in those crowds, with the insurrectionists and the revolutionaries, with the dead and the dying, with the grieving and the mourning.

Yet, I look at the world and I ask: Where is your power now?