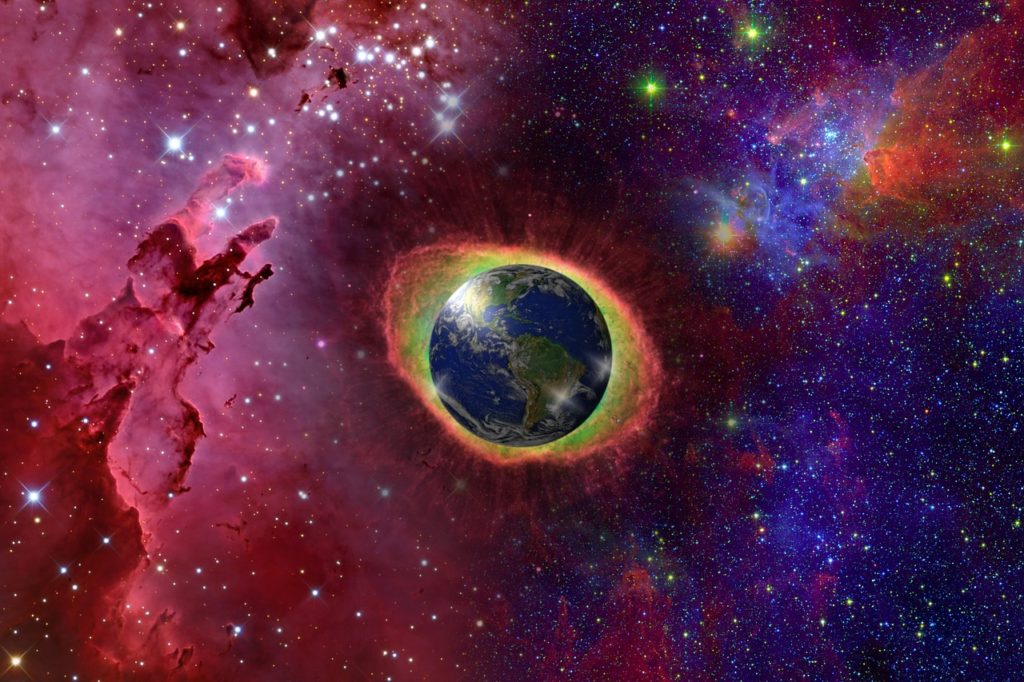 I could preach all four readings in one sentence: God Is Bigger. But we live in a time when clichés and bumper sticker theology won’t cut it, even if they’re true. We face serious issues, serious life-threatening, heart-rending issues. In the face of incarcerated children crying for mothers they’ve been told abandoned them, politicians threatening each other with bodily harm and some inflicting harm, the daily harassment black folk are subjected to by white folk using the police to harass us for simply being in public, women learning that the folk in their lives–parents, friends and sometimes pastors–aren’t safe to confide in their histories of sexual assault, the war in Syria that the news isn’t covering anymore, the starving children in Yemen caught up in their government’s conflict with Saudi Arabia and the weapons we sell used in this slaughter, in the face of all of this, “God is bigger” sounds like a cop out.

Yet that’s exactly what God says to Job. Well, not exactly. It takes God one hundred and twenty-six verses between Job chapter 38 and 41 to say it. And she says it poetically, and indirectly. God calls Job to contemplate the wonders of creation and God’s revelation in and through it that Job might see God and God’s power in it, but also see Job’s own insignificant place in it.

Well, have you? God says, “This is who I am. Who are you?” Eventually Job will say, “I’ve said too much,” and put his hand over his mouth because he knows God is bigger and he is comparatively insignificant. But there’s a twist in Job’s story. In order to understand it, we need to understand how Job found himself in this place being interrogated by God veiled in a whirlwind, face to force.

Job was beset by horror. He lost everything in the building waves of a tsunami of catastrophe. Job lost everything he owned; he lost it all through violence. He didn’t make a bad deal or risk the wrong stock. He went from the Forbes list to having no way to feed himself or his family. It doesn’t matter how much you have or how you got it, losing everything hurts. Contemporarily we have a lot of shame about money and its loss, trying to keep up appearances, needing help, hunger and poverty in the suburbs, even in nice churches like this.

Job didn’t even have a moment to muster up the strength to ask for help when he was beset by unfathomable tragedy. All of his children were murdered. The book of Job may be a story the Israelites used to teach and debate theology, but the scenarios it constructs are deeply rooted in reality. These stories are somebody’s stories. People knew folk who had had those kinds of losses in the ancient world, and we do too. In part the book of Job exists because there are no good answers to why such awful things happen to people. And the truth is, even the best theology falls flat when you’re looking at a murdered child.

Job gives voice to our desire to ask – no – demand God explain this mess: this broken world, murdered children shot in school, others killed by their own parents, women and girls and some boys and men subject to sexual harassment and assault, some for years, disbelieved if they report, blamed if they don’t, hungry children in a world of abundance, new obstacles and some of the same old obstacles to voting set up just fifty years after the assassination of Dr. King, white supremacists marching in the streets, the police being used and letting themselves be used to harass black folk for being black in public, shopping or trying to enter our own homes. And though the world and the news cycles have moved on some of are still saying Black Lives Matter as the faces of new victims fill our TV screens. Like Job I have questions for God. And while I’ve never seen that particular whirlwind I too shouted into the wind.

Job took all of his hurt and horror to God. He also took his faith that there had to be a way to make sense of his world that didn’t involve bad theology. There’s a lot of bad theology out there. Some of it’s in churches. Some of it’s on TV. Some of it’s in churches on TV. Some of it’s on the lips of politicians. And some of it is ours as we do our best to make sense of the world with the tools we have, the sermons we’ve heard, the folk wisdom of our families, and too many self-help books and TV shows. And then there are the folk who love us who have definite opinions about what is going on in our lives, what we’ve done, what we need to do and what it all means.

Job had the kind of friends who stayed with him through the worst of his grief; then they started explaining how he was ultimately responsible for what happened to him. There are people today who blame women for being abused at home, harassed at work, or assaulted in the street. There are folk who buy into new age theologies that say you get whet you give and draw bad energy to you. There are even Christians who will say you didn’t pray enough, or have enough faith.

But Job knew there was nothing he could have ever done to bring any of what he suffered on himself, so he went to God. But it didn’t turn out quite like he expected in our lesson. He went to God holding the pieces of his broken heart in his hands to ask God why and God said, “I am bigger.” All of our lessons make that claim. Our psalm: Bless the Living God, O my soul. Holy One my God, you are very great.God is bigger. Our epistle: Jesus having been made perfect became the source of eternal salvation. God is bigger. Our gospel: Are you big enough to drink the cup that I drink, or be baptized with the baptism that I am baptized with? I know you think so. This is what bigger really looks like: whoever wishes to become great among you must be your servant, and whoever wishes to be first among you must be slave of all. For the Son of Woman came not to be served but to serve, and to give his life a ransom for many. Even when confined to human flesh God is bigger.

God spoke to Job but didn’t explain why. The people who put together the book of Job knew that even when you find your way to or back to God after a tragedy you don’t get all the answers if any. You may never hear God speak to you about your sorrow. But you will find, as Job found, a God who is present, and yes bigger and greater and grander and more exalted and more majestic than you can imagine, but also a God who sees your tears and hears your cries shouted into the wind. And sometimes, even when not answering the questions you asked–and it’s ok to ask–God will choose to answer the question you need. For Job it was that he was not wrong, nothing that had happened to him was his fault, and his friends and their bad theology were all the way wrong.

The God who attended Job in the whirlwind is the God who in the psalm is clothed with honor and majesty, wrapped in light as with a garment, stretches out the heavens like a tent, sets the beams of her chambers on the waters, makes the clouds her chariot, rides on the wings of the wind, and makes the winds her messengers. That same God became a child, begotten, birthed, breastfed, bathed, baptized, and buried. God came to us in a form less terrifying and more fragile than a whirlwind, in our own human flesh. In living, in loving, in healing, in teaching, in dying, in rising God in Jesus is the answer to questions we did not ask as much as the answer to the questions we shouted into to wind. And unlike Job’s whirlwind, Jesus remains and stays with us through the storms and through the calm and all that will come our way. Whatever it may be, God is bigger.