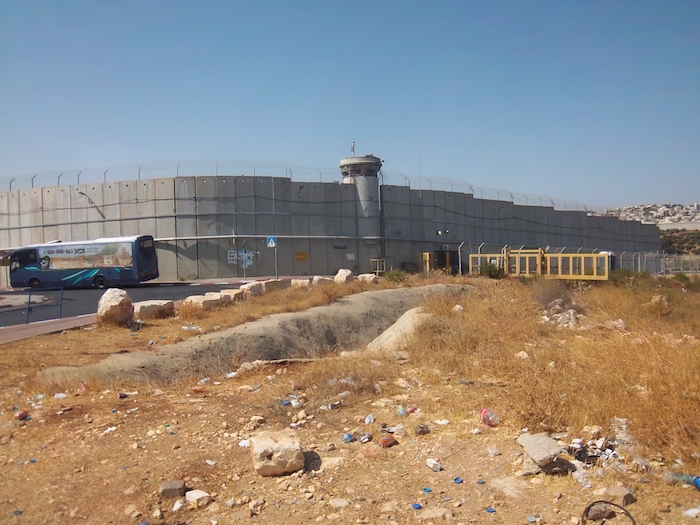 “Zionist” is regarded as a slur in many of the spaces in which I find myself. Settlers are regarded as (nearly) single-handedly destroying the peace process in those same spaces—inhabited by Jews as well as Muslins, Christians and non-religious folk. So it was a visceral shock to hear several of our speakers describe themselves as Zionist settlers, even though I knew the word has a variety of implications including normative Israeli patriotism.

I am here in Israel to hear stories from Israeli and Palestinian voices as a way to promote coexistence and peace-making. So I listened to hear and understand. But I am not a blank slate so I hear in concert with my own internal voices and try to hold the two streams in respectful conversation.

It was helpful for me to hear settlers talk about how they understood settling, as occupation=habitation, not colonialism as do the Palestinians and many in the West and some in Israel. They spoke of the importance of Hebron (in the West Bank) as the home of Abraham and the other locations of so much of the Hebrew Bible’s narratives drawing them home to fulfill a mission to inhabit the land. They also acknowledged that their religious narrative was not the only narrative and that they were—at different paces—listening to the narratives of Palestinians.

I also got a feel for the/a Israeli pioneering narrative, occupying/settling the land to cultivate it border to contested border to fulfill a calling to (re)build a nation. What was missing was the early (1943-1945) understanding of how the people in the land could be expected to respond to mass immigration and nation-building in their midst. Someone mentioned the slogan, “A people with no land and a land with no people.” (I could not help but think of similarities between the Afrikaner mythos and that of Israel here as with the roads that bypass the Palestinians.)

The settlers talked about how isolated the two communities are, particularly since the erection of the security barrier. I was surprised to learn how isolated they truly are. The settlers didn’t know that there were Palestinian villages one and six miles from them. There was no way to drive to or by those villages; the Israeli roads go from settlement to settlement to Jerusalem bypassing Arab villages. They have no casual interactions with the exception of labor. As the Israeli journalist who accompanied us to the West Bank today said, “Palestinians built Israel.” They are a significant portion of the workers in hotel and restaurants and construction. Yet there are virtually no places (but one market and one intentional program) to be in the same place on the same footing.

I also gained an understanding of the layers of trauma with which many Israelis live as a part of their national story: The enduring horror of the Holocaust, particularly poignant in the missing elders and all that was lost with them, the sense of the miraculous after the 6 Day war dashed by the losses in the 72 war, the pervasive terror unleashed by the bombings in the Second Intifada from 2000-2005, and the accompanying and continuing rocket, mortar and sniper attacks—all on civilian communities, sometimes deliberately targeting children. The man who designed and implemented the security border—wall and high tech fencing—oriented us to it and communicated the desperation, trauma and terror that led to its implementation. These things helped me to hear and understand the Israeli story from Israeli perspectives even as I critique some of what I heard and hold it in tension with what our Palestinian conversation partners shared. It helped me to hear them that they acknowledged the reality of the occupation with that word.

There is not surprisingly a lot of anger towards the Palestinians, particularly their leadership for not putting an end to the continuing attacks on communities near the Gaza border and for rejecting the Clinton-Olmert plan. They blame the Palestinians for walking away from a viable peace deal.

They spoke of 500,000 settlers and how difficult, nearly or completely impossible it will be to dislodge them. For one that meant the two-state solution was dead, and a one-state solution was on the table but with no easy answers about how to remain culturally and demographically Jewish while granting full rights to the occupied. The other held out hope for a two-state solution against the evidence. Conversations invoked the peaceful transition in South Africa and more difficult one in Ireland, and the evacuation of 100,000 Fresh colonists in Algeria.

They seem to want to write an end for their story that will result in peace and dignity for all but each question/chapter is still unresolved and there are some sacrifices they will not make. Nationalist zionism, a particular Jewish/Israeli hermeneutic, lingering trauma, anger, and fear are the lenses through which I hear the Israeli story. It is as are all stories, more complicated than any one presentation.

[I am on my way to Bethlehem to immerse myself in the Palestinian story since this trip was far more one-sided than I was led to believe and the Palestinian story was mediated more than once through Israeli voices, and when in a Palestinian voice sometimes rebutted. Stay tuned for that reflection.]
Israel Jerusalem Palestine peace making
Share this post
Previous
Next