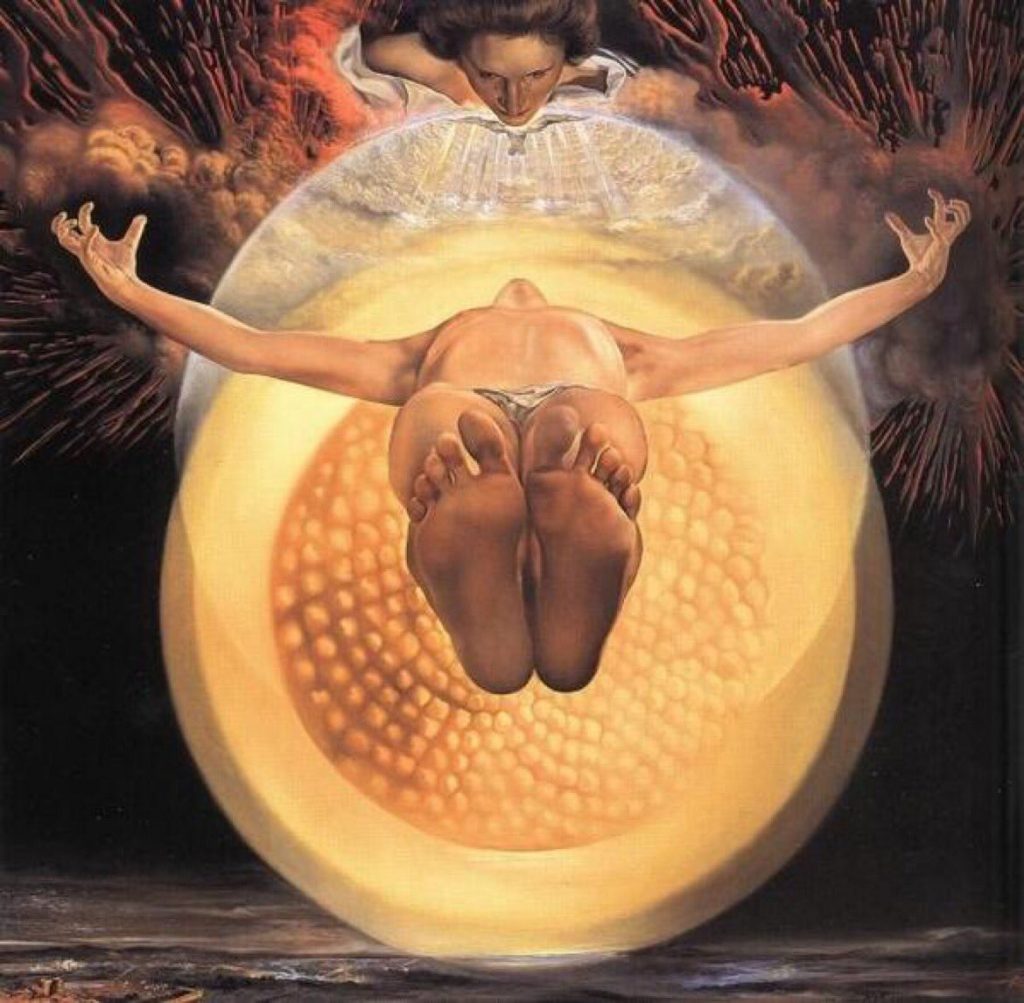 The Ascension of Christ, Salvador Dali, 1958

Open our eyes that we may see. Amen.

We are here in no small part because of the power of the story Jesus. That power permeates the words of the story and extends far beyond them. It is a power that defies the rules of logic and science. The touchstone confessions of our faith are mind-boggling: a spirit impregnation, a virgin birth, a life of miracles, revelations, divine appearances, transfigurations and voices from heaven, a brutal but ultimately ineffective execution, a resurrection, spontaneous post-mortem live physical appearances while walking through walls and closed doors. And now, an ascension to heaven, not one but two—the story in Luke is earlier than the story in Acts, in fact it is set on that very first Easter Sunday evening.

This festival of the church celebrates the triumphant power of Jesus whom neither death nor earth’s gravity could hold. The ascension is a truly astonishing display of divinity. I love that the story has the disciples gazing up into the skies—I imagine with their mouths hanging open—until a messenger from God asks them how long do they plan on staring up into the sky. If their answer had been recorded it might have been something like, “Until this all makes sense…”

Try to wrap your twenty-first century mind around how the followers of Jesus wrapped their first century minds around Jesus ascending to heaven on a cloud. Maybe they knew the ancient Hebrew stories, that Enoch walked with God and was not for God took him, that God swung down a sweet chariot, stopped and let Elijah ride. And they had already seen Jesus perform so many miracles. But this was simply eye popping and jaw dropping.

Try to imagine what they knew of the skies above them. They may well have thought the stars were angels of God or other gods. We know Mars, Venus, Jupiter and Saturn as planets, but those are the Roman names of gods; folk in the ancient world identified the lights in the sky with those gods, even if they didn’t worship them themselves. And, it’s not entirely clear if they would have known the difference between a star or a planet, let alone that stars are balls of fire like our sun and planets are balls of dirt like our earth.

As you contemplate the mystery of this miracle, consider whether all we know about space, from moonwalks to the Mars rover and Hubble telescope leave us any better prepared to explain what they saw. Where did Jesus go? Our knowledge of astronomy—and maybe science fiction—tell us he went somewhere more than just up. Many if not most of us fly in, through and above the clouds on a regular basis and we know that’s not where heaven is, at least not in a physical sense. Now, I’m not about to claim Jesus was some kind of inter-dimensional being, but I’m not prepared to rule it out.

The Feast of the Ascension calls us to figure out what it is we mean by “heaven.” I believe that heaven is a place that is as far beyond us as the moon was beyond the imagination or literal reality of the disciples. There is no technology that we can use to get ourselves to heaven, no more than they could build a tower to the moon. Heaven is the realm where God resides and reigns, and whatever that means about the stars or astral plane, God brought heaven to earth in Jesus. Now heaven is as much with us and in us as it is beyond us.

And yet there is at the same time a realm where God exists beyond our imagining. The Rev. Broderick Greer, an Episcopal priest in Memphis says, “The Ascension isn’t about Jesus literally ascending to a literal physical place called “heaven.” It is Jesus being swallowed by love.” The Ascension bears witness to the mystery and majesty of God, by refusing to answer all of our questions: Where is the physical place of heaven? Where is God apart from us? Where does she live? Where exactly did Jesus go? What do you believe and what are your questions?

The disciples in the story certainly had questions: Now that you’ve got all this power and are using it to do supernatural stuff, are you going to use it on the Romans and return Israel to self-rule? And Jesus said, “Mind your beeswax. It is not for you to know…” God has plans that are bigger than any one nation. Sometimes we forget this. At times the church has tried to be a nation, kingdom and empire, conquering and killing, colonizing, converting and enslaving. The Ascension reminds us that ultimate power is God’s. And God’s plans for God’s power don’t resemble our plans.

God’s plan was to gift the same power by which Jesus was raised from the dead and ascended into heaven to the followers of Jesus, to bathe us in it in a holy fire baptism that will burn within us but not destroy us. God’s plan is that we be in communion with God and each other, fueled by the power of the Holy Spirit to love as God loves. The Ascension is a sign, pointing towards what is to come. The church, God’s body on earth, will be filled with the Holy Spirit, the love of God incarnate in Jesus, and the world will never be the same.

Look up. Look inward. Look into your neighbor’s face. That is where God dwells, with us, among us and within us. Amen.

Luke 24:50 Jesus led them out as far as Bethany, and, lifting up his hands, he blessed them. 51 While he was blessing them, he withdrew from them and was carried up into heaven. 52 And they worshiped him, and returned to Jerusalem with great joy; 53 and they were continually in the temple blessing God. (NRSV, adapted)

Acts 1:1 In the first book, Theophilus, I wrote about all that Jesus did and taught from the beginning 2 until the day when he was taken up to heaven, after giving instructions through the Holy Spirit to the apostles whom he had chosen. 3 After his suffering he presented himself alive to them by many convincing proofs, appearing to them during forty days and speaking about the realm of God. 4 While staying with them, he ordered them not to leave Jerusalem, but to wait there for the promise of the Father. “This,” he said, “is what you have heard from me; 5 for John baptized with water, but you will be baptized with the Holy Spirit not many days from now.”

6   So when they had come together, they asked him, “Lord, is this the time when you will restore the kingdom to Israel?” 7 He replied, “It is not for you to know the times or periods that the Father has set by his own authority. 8 But you will receive power when the Holy Spirit has come upon you; and you will be my witnesses in Jerusalem, in all Judea and Samaria, and to the ends of the earth.” 9 When he had said this, as they were watching, he was lifted up, and a cloud took him out of their sight. 10 While he was going and they were gazing up toward heaven, suddenly two men in white robes stood by them. 11 They said, “Men of Galilee, why do you stand looking up toward heaven? This Jesus, who has been taken up from you into heaven, will come in the same way as you saw him go into heaven.” (NRSV)

“God of all power, Ruler of the Universe, you are worthy of glory and praise.
Glory to you for ever and ever.

At your command all things came to be: the vast expanse of interstellar space, galaxies, suns, the planets in their courses, and this fragile earth, our island home.
By your will they were created and have their being.”