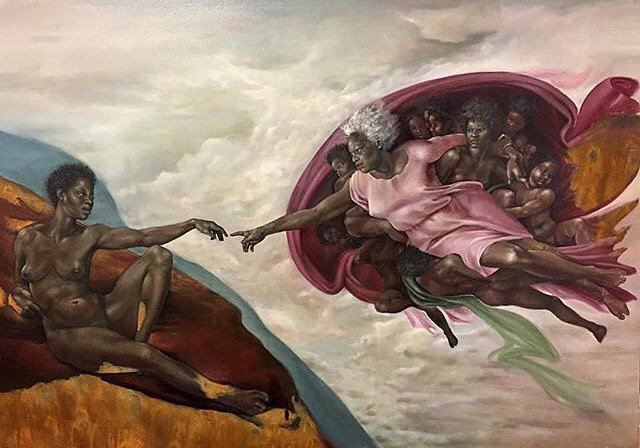 The Creation of Adam by Harmonia Rosales

[In an earlier version the title was misspelled as “exercising.”]

In the Name of the God who loves we who are hated, those who hate, and those whom we hate. Amen.

Forty-nine. Forty-nine lives cut short. Forty-nine people murdered. Forty-nine souls martyred. Forty-nine of God’s children executed for living and loving out loud as gay, trans, bi and lesbian human beings, and for loving them, being with them, dancing with them, serving them, entertaining them, and protecting them. They were targeted on Latin Night at the Pulse Nightclub one year ago, an evening that was known to draw in the Hispanic gay brown and black community.

They were killed because a man decided they didn’t deserve to live, that they weren’t deserving of God’s gifts of life and love to them. Who was he to say who was worthy of God’s love, worthy of life, worthy of being created in the image of God? He was someone who chose an image of God to worship that was as broken and twisted as he was, a god who hated what he hated and feared, perhaps even what he hated and feared about himself. We may never fully understand all the reasons why he chose a god who hates over the God who loves.

Here I do not speak of Allah or al-Islam. Allah is one of many names for the One true God whom we share with Muslims and Jews—in spite of Trinitarian arithmetic. Allah it is the name in which Arabic-speaking Christians have always prayed because it is God’s name. Islam like Christianity, Judaism, Hinduism, and even Buddhism, has followers who choose the most hateful and violent texts and traditions, interpretations, misinterpretations and misunderstandings of their religion. The hate cult to which the murderer pledged allegiance is as far beyond mainstream Islam as the Christian Knights of the Ku Klux Klan are beyond mainstream Christianity.

Our nation and our world are full people who choose hate and death for others, and sometimes for themselves. The Alexandria shooter who hated Republicans for being sexist and racist also chose hate and death. He too took it upon himself to decide who should live and who should die because of his personal and political beliefs.

The Pulse shooter represented a particular ultra-conservative ideology and the Alexandria shooter an über-progressive one, and what they have in common is the self-righteous justification of their own lethal violence. They share a belief that other human beings with whom they don’t agree have neither a God-given right to life nor a constitutionally protected right to life, liberty and the pursuit of happiness. They both chose hate and death, but God offers us life and love.

God proves God’s love for us in that while we still were sinners Christ died for us. [and]…God’s love has been poured into our hearts through the Holy Spirit who has been given to us. (Romans 5:8, 5)

The question is for us as well. Will we love? Will we choose life and love?

The choice to love is a difficult one. Have you met people? They’re horrible! But… God’s love has been poured into our hearts through the Holy Spirit who has been given to us. We are not on our own. God’s Spirit, God’s Love, is with us and in us and among us. And that love comes with responsibilities. It is not for us alone. It is for the world, for the healing of the world’s hurts and hates.

Some of those hurts and hates have been baked into our American bones.

Philando. Philando Castile. Sitting in his car with his baby girl and her mother. Live on Facebook. Like many here in Texas and across the US, legally exercising his Second Amendment rights with a licensed handgun tucked away in its holster. He even notified the officer so there would be no misunderstanding. But he was black. Black like me, black like Sandra Bland, Rekia Boyd and 6 year old Aiyana Stanley-Jones, shot in her own bed, black like Walter Scott who was running away unarmed when shot in the back by a police officer and blackness is terrifying, in part because this nation was founded on the idea that to be black is to be inhuman and there fore not entitled to life, liberty or justice.

We have to talk about how this culture inculcates fear of blackness because it is killing us. Some of us more than others. It is not simply racism, biased opinions. It is a white supremacist structural system that infects all of us including black and brown police officers and jurors who believe it is so reasonable to be so in fear of blackness that no one should be punished for killing unarmed black folk because they too share that fear. It is the unholy communion[1] of the American enterprise. [American religious scholar Candace Benbow puts it more strongly: “Black bodies and Black blood. The holy communion of Whiteness.]

There is a deep-seated loathing of blackness and black people in this country. It is at best a disease, at worst a demonic affliction, perhaps both. It feels overwhelming but we are neither helpless nor hopeless.

Jesus summoned his twelve disciples and gave them authority over unclean spirits, to cast them out, and to cure every disease and every sickness. (Matthew 10:1)

Jesus has authority over death, disease and demons and that includes white supremacy, racism, homophobia, Islamophobia, transphobia and all the hatreds and hurts that infect and plague our world, including toxic masculinity that batters at home then terrorizes in public. (The two things most mass-shooters and perpetrators of domestic terror have in common is being men and having a history of domestic violence.) And Jesus has given that authority to us. Jesus called his disciples, empowered his disciples, then he sent them out to do the work of the reign of God. That work is now ours: Proclaim the good news, ‘The reign of heaven has come near.’ Cure the sick, raise the dead, cleanse the lepers, cast out demons.

That is our work, the dismantling of white supremacy, systemic racism and the hate and fear of non-white peoples and cultures that are behind them. Those are the demons that bedevil us. Those are the diseases that sicken our nation and the church. We do this work by accepting our calling to it, by identifying the demons and diseases, cutting the infection out of our society and its systems—educational, health and justice—and where it cannot be cut out or cut off, let it die. For we are also called to raise the dead and some of what is broken in this world simply needs to die and be raised to new life in Christ Jesus, and that includes the Church.

The gospel is that the reign of God is among us, the love of God is among us, the antidote to all that is broken and diseased is among us. We are the ones we have been waiting for. The work is ours. It begins in earnest when we go out of these doors. Our gospel less says that Jesus first sent his disciples to his own people, their own people. The work of dismantling all of these structures and the hatreds on which they are built begin at home, in homes and families, and friendships and congregations and classrooms, move theatres and surgical theatres. Every place that we are, we must affirm the human dignity of all God’s children and call out and stand against every indignity and every injustice.

If anyone will not welcome you or listen to your words, shake off the dust from your feet as you leave that house or town. Truly I tell you, it will be more tolerable for the land of Sodom and Gomorrah on the day of judgment than for that town. “See, I am sending you out like sheep into the midst of wolves; so be wise as serpents and innocent as doves. Amen.