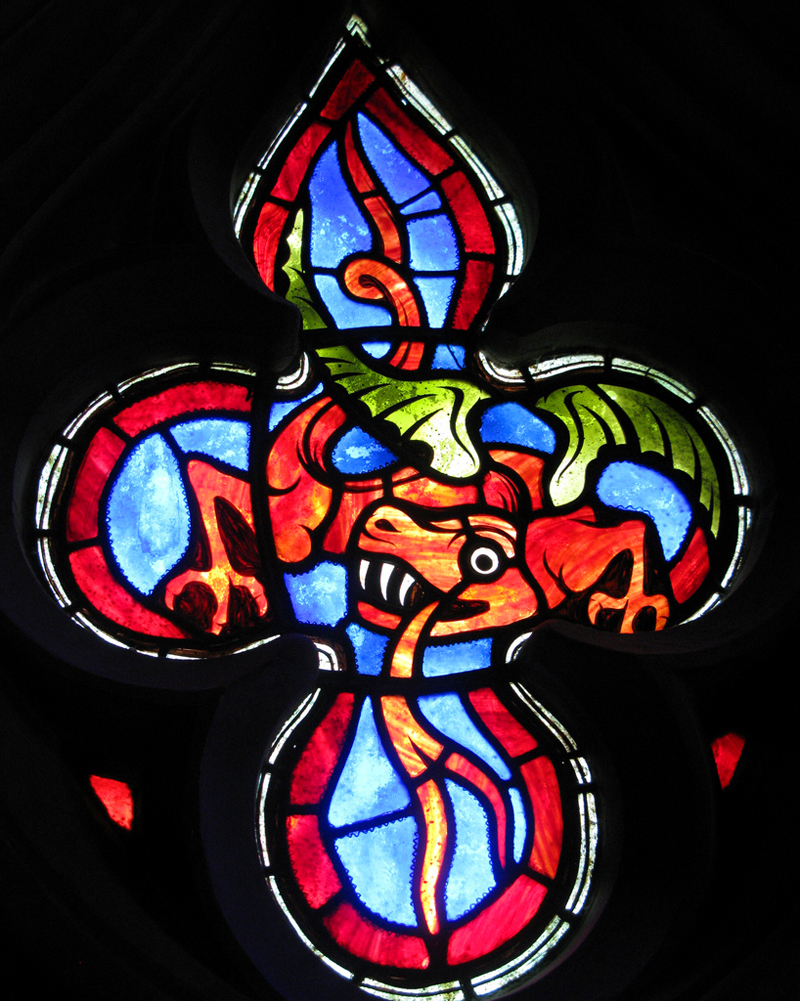 Dragon, from Art in the Christian Tradition, a project of the Vanderbilt Divinity Library, Nashville, TN.

Francis of Assisi was a rich, spoiled young man who liked to drink and dropped out of school. He daydreamed of being a heroic knight and went off to war in fancy armor that saved his life—not by deflecting blows but by marking him as someone who could be held for a ransom. It was in his jail cell that he began to become the man we remember today after discovering the horror of war was nothing like his fairytales or daydreams. It was there that he had his first visions of God, and there he experienced hunger and disease in his own body. Upon his release he began to minister to lepers and ultimately accepted God’s call to abject poverty and service. Today we remember Francis for his care of the earth and her creatures. He taught us:

I’d like to think this is a sermon St. Francis would preach or at least appreciate it. Psalm 148 could well be the inspiration of the Canticle of Brother Sun.

Halleluyah. Praise the Womb of Life. Let all her creation praise her. Praise her aardvarks, bats, cats, doves, eagles, fireflies, gophers, horses and ibex—jaguars, kangaroos, lemmings, mice, newts, orangutans, pythons and quails—rabbits, sheep, tigers, urchins, vermin, wombats, xenopus, yaks and zebra. Praise her earth, wind and fire, rain, snow and hail. Praise her mountain and hill, river and valley, ocean shore and desert sand. Praise her children of earth in all your diverse glory. Praise her and love what she had made. Love her earth and its creatures. Love them. Care for them. Tend them. Preserve them.

My favorite verse of the psalmist’s “Franciscan” love song to all creation is v 7:

Halleluyah. Praise the Womb of Life from the earth, you sea monsters and all deeps!

Sea monsters! The tanning are monsters of the deep, dragons whose most famous exemplar is Leviathan. In the wider ANE these beasts are harbingers of chaos, their destructive power is formidable enough to go to war with the gods and win. This background is assumed in the Hebrew Bible where God is always victorious over them and anyone symbolized by them. But here in our psalm as well as in their first appearance in Genesis they are part of God’s good creation. They are subject her and they praise her.

For Iron Age women and men these sea monsters were terrifying. Their genus would include human-eating sharks, whales, and any fish big enough to overturn a boat and drown a person. The psalmist’s insistence that the tanninim are part of God’s chorus of praise is a claim that Francis would recognize. Francis and our psalmist saw the handiwork of God in faces that others called monstrous.

We live in a time were some folk look into human faces and do not see the image of God. The white supremacist values that form the foundation for our American culture and pervade it say that black folk are monsters to be shot on sight. The policies of the Governor of Texas say that refugees are not members of the human family who merit Christian—or even human—compassion and hospitality. The demonization of Muslims and Mexicans is a denigration of their humanity. The entire conversation about undocumented immigrants is about brown Spanish-speaking immigrants from beyond our southern border for whom Mexican is a codeword. No one is concerned about Canadians and Germans who overstay or work without valid documentation. Others look at the marriages, partnerships and unions of lesbian and gay couples and those where one partner is trans and fail to see the love of God and instead see something monstrous.

The word monster encodes our fear. It says nothing about God’s vision for her own creation. We have the power to name what we see. We can redefine our monsters and strip our fear and loathing from them. When we do that, the terrifying tanninim become tunnanu and for us tuna. The terror of the Sumerian seas has become a child’s lunch. Who will take up Francis’s path to teach the love of God’s creation to those who call us monsters? Who will like Francis relinquish privilege —not wealth—but white privilege and become enemy and traitor to those who formed you to proclaim the humanity and divinity of God’s creation. You cannot love God without loving her creation. Amen.