Believe God: Listen to the Voices in Your Heart & Head

Believe God: Listen to the Voices in Your Heart & Head

Genesis 15:6, Abraham trusted in God… Hebrews 11:1, Faith is the essence of things hoped for, the evidence of things not seen… 3 By faith we understand…

Let us pray: Holy One of Old, open our eyes that we may see. Amen.

I’m not asking what or who do you believe in, because that is not the limit of what faith is about in scripture. There are folk who wear their belief in Jesus like a t-shirt; they are team JCeezy and like good sports fans, talk trash about all the other teams. That is not faith. That is fandom. What do you believe? But before you tell me, show me.

Genesis says that Abraham trusted in God. You know the Hebrew word for this kind of trusting belief already; it is amen. Abraham said “yes” and “amen” to everything God said. But belief is more than just words. As she tells the story, the author of Hebrews writes – by the way, I’m not the only scholar who believes that Priscilla wrote Hebrews – she writes in verse 8: By faith Abraham obeyed… v 9, by faith he stayed… v 10 he looked… and in v 11, he received… Abraham didn’t just believe, think or feel, he got up and got busy (that too). Faith is evidence – that’s a legal term for proof in Greek – and Abraham proved his faith with his actions. What do you believe Abraham? Watch and I’ll show you. So what do you believe church? What are you showing? What are you showing the world about your faith in God?

Whether the author of Hebrews was a woman or not, she probably wasn’t a feminist. Oh sure, she mentioned Sarah, but the rest of her exemplars were men and if you read the whole chapter, especially the end when she brings this sermon home, she includes some men whose supposed faithfulness includes abusing and killing women. But that’s next week’s sermon, and I’ll be on the road again. This week our exemplars in the faith are Abraham and Sarah and Isaac and Jacob. What do you believe? Don’t tell me; show me.

I believe the faith of biblical women even if it was in a God their men said was male like them is a faith I can’t live without in a world that still marginalizes women and girls, allowing us to be snatched off our neighborhood streets, thrown into dungeons, used and abused with no one looking for us if we’re not the right sort of girl from the right sort of family. I believe God is our God too. I believe God cares about our stories too, even when the media doesn’t. I believe.

I believe in, trust in, hope in, the God of Hagar, Keturah, Rebekah, Rachel, Leah, Bilhah and Zilpah because of their faith – their amens and their actions – in the God of Israel, in spite of every good reason to choose another path. Even the stories that tell their stories don’t always tell their side of their stories, their faith stories, they’re too busy telling how God used them in the faith stories of their men. This morning, I’m going to do a little womanist midrash and fill in those blanks. For those of you who don’t know, womanism is the deeper, richer feminism of black women, like purple to lavender. And midrash is classical and contemporary Jewish interpretation of the scriptures, asking questions and filling in the blanks when need be.

So I believe in the God of Abraham, Isaac and Jacob this morning. But I also believe in the God of Hagar, Sarah, Keturah, Rebekah, Rachel, Leah, Bilhah and Zilpah. Their stories teach me about faith, even though they weren’t good enough for the author of Hebrews, with the exception of Sarah, the acceptable token. You know some folk like to include one woman on an all-male committee and call it “balanced.”

Keturah, Abraham’s other, other woman and baby mama had to believe God because Abraham’s notion of child support was a couple of presents, one time. Gen 25:6: to the sons of his other women Abraham gave gifts, while he was still living, then he sent them away… But Keturah believed that God would make a way out of no way and no child support for six of Abraham’s sons. And God did; God took care of Keturah and her children. One of her grandsons was Sheba, and one of his descendants was a Sista-Queen who turned Solomon’s head and turned him out.

Rebekah believed in God when she struggled with a high-risk pregnancy. Later, she struggled in her parenting. She had two boys who were at each other’s throats. And she wasn’t perfect by any means; she chose one over the other. But God believed in her and used her anyway. I believe that God doesn’t write us off for making mistakes.

Rachel believed in God while she waited for her promised husband, while her wedding day was ruined, when her father betrayed her, while she watched her beloved marry her own sister. And when she finally got her man, he kept going back to her sister’s bed, even though he had an heir and a spare, even though he kept telling her she was the one he loved. And Rachel believed God for a child. And God gave her an heir and a spare. And when her first long-awaited child was taken from her and she didn’t know if he was dead or alive, and her husband sent her baby off to a foreign land, she believed that God who gave her those children was able to bring at least one of them home, and God returned both her sons to her.

Leah believed in God who made her in God’s image no matter what anybody else thought about how she looked or didn’t look. Leah’s father used her to betray her sister, saying he did it for her own good. And when everyone in the whole world was mad at her, laughing at her, God was with her. God blessed her with children to love and raise and parent better than she was parented. And when she cried in the night over a man who slept with her but told everybody he didn’t love her, God’s love was there for her whether she knew it or not.

I believe that Bilhah believed in God even though she found herself enslaved to Rachel’s father, passed down to Rachel like a family heirloom and then turned over to Jacob to impregnate because Rachel didn’t have enough faith to wait on God. Or perhaps Bilhah couldn’t see her way clear to have faith in the god of her enslavers and abusers. Leah’s son, Reuben whom she had known since he was a baby raped her when she was an old woman. Yet I’d like to believe that Bilhah had the kind of faith in God that our enslaved ancestors had – it doesn’t matter what you do to us or our children. We are free in God. You can touch our bodies but not our souls. You can kill us like dogs in the street but there is a God of justice, who sits high and looks low. Vengeance is mine says God-Whose-Name-Is-Holy.

Zilpah, Leah’s maid had to believe there was a God somewhere when Leah turned her over to be impregnated, out of spite.

The faith stories of Israel are full of the good, the bad, the ugly, the dirty, the nasty, the crazy and the cray-to-the-cray. Maybe you think your faith doesn’t count this morning, maybe the author Hebrews wouldn’t think your story is important enough to tell the church folk about – you know some people think we shouldn’t talk about sex and violence and rape and murder and hurt and pain and death and disease and grief and depression in church.

Oh but faith! Faith says bring it all to God because God can handle it. God will handle it with you. God will handle it for you. Only believe. Believe that God can bring you through and deliver you from harm. God can. And sometimes God will. But also know that faith doesn’t mean that you won’t have sorrow or grief or pain or even have a horrific act of violence inflicted on your person. Real faith says that even if the worst should happen, God will be right there with you and bring you through.

Let me leave you with what might sound like some strange advice: Listen to the voices in your head. Listen for the voice of God with your heart. Follow the voice of God with your behind, hands, feet and mouth. The faithful folk of scripture didn’t just wear their faith on donkey bumper stickers; they got up and followed God, walked with God, spoke with and for God and sometimes, died for God. Faith without works is dead. Belief without action is invalid. If you believe God, get up and do something.

Sometimes, when I’m out walking, particularly if there is a body of water nearby, I play Donald Lawrence, O Peter (Walk Out On the Water). And I hear Jesus saying to me as he says in that song, I am Mary’s Baby, don’t you be afraid; walk out on the water, don’t be afraid… That is my shouting song.

I know you will

Believe in yourself, right from the start

You’ll have a heart

To last your whole life through

If you believe in yourself

As I believe in you.

What do you believe? Don’t let anybody tell you, you, your faith or your story don’t count.

My former classmate at the Howard University School of Divinity, Yolanda Adams sings I Believe I Can Fly:

Donald Lawrence and the Tri-City Singers, O Peter (Walk Out On the Water):

Believing God means believing in yourself. Let the Holy Spirit incarnate in Lena Horne prophe-sing to you: 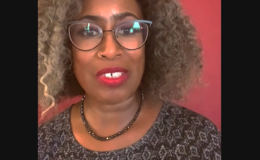