We begin with the simple historical fact that Jesus was a Jew… It is impossible for Jesus to be understood outside of the sense of community which Israel held with God… The Christian Church has tended to overlook its Judaic origins, but the fact is that Jesus of Nazareth was a Jew of Palestine when he went about his Father’s business, announcing the acceptable year of the Lord. (Thurman, Howard. Jesus and the Disinherited. pp 15-16, 1949)

[The film clip is from the Lumo Project. Compare their portrayals of Jesus and his disciples with those of the History Channel.]

The Church has struggled with Jesus’ Jewish identity, sometimes violently, sometimes lethally at the expense of the lives and property of Jews. One of those responses has been anti-Judaism – related to, but distinct from, anti-Semitism. Anti-Judaism minimalizes, trivializes, demonizes and/or declares Judaism incomplete, invalid or insufficient. This is sometimes called supercessionism, the idea that Christianity replaces and completes Judaism. However, the Christians who hold to this theology vehemently disagree with the same notion in Islam.

The History Channel’s blockbuster production of the bible sadly perpetuates the Christian heresy of anti-Judaism in its depiction of Jesus. First, the producers erased Jesus’ ethnic identity by refusing to cast an actor who shares Jesus semitic ancestry and looks like the semitic peoples of the world in North Africa, the Middle East and West Asia. They cast a European for Jesus and for most of the ancient Israelites (see my previous commentaries here and here) and for most of Jesus’ disciples. However, they cast semitic-looking actors for the Pharisees and a Moroccan for Satan (for more on that click here). This identifies the Israelites, Jesus and his immediate followers with whiteness over and against the Jews. The construct of whiteness is a thoroughly modern one from which Jews have been excluded and to which they have been included as their social and political fortunes wax and wane with regard to the dominant culture. 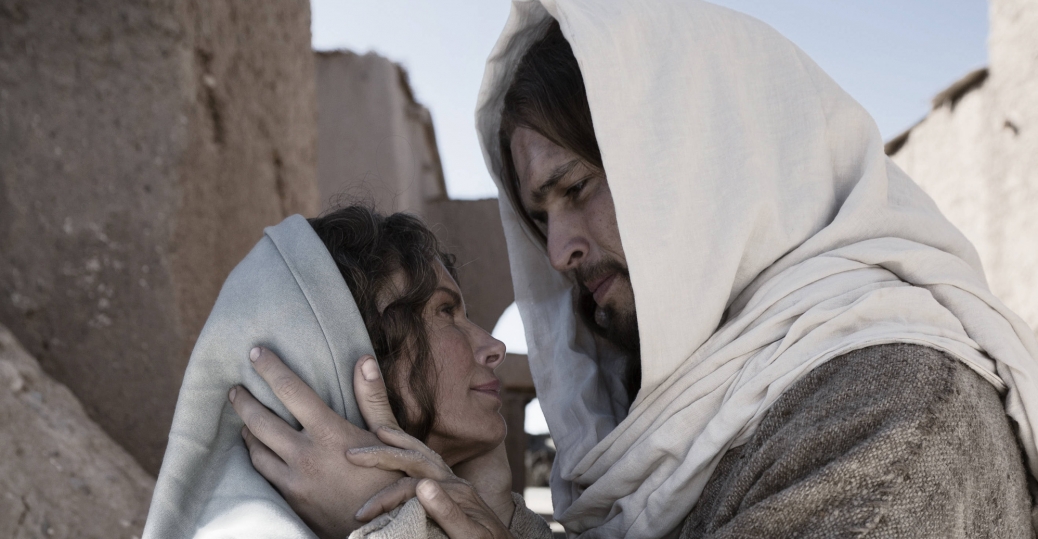 Second, Jesus’ religious Jewishness is erased in the production. Jesus is a Torah-observant Jew who wears tzit-tzit, the holy fringe on his garments. (See Num 15:38–39; Matt 9:20; 14:36; Mark 6:56; Luke 8:44) He does not wear it in the production contrary to the Gospels – not even in the synagogue! Likewise the History Channel Jesus does not cover his head in public or even when teaching. As an observant fringe-wearing Jew and Torah teacher Jesus would cover his head – and not with a pashmina as he does that one time in the synagogue scene (see image above immediately following synagogue service).

The synagogue service (taken from Luke 4:16-30, greatly abridged) perversely misrepresents Jewish liturgy, worship and tradition. There is a cantor chanting in a lovely trope (musical intonation). But what is he chanting? Well, he starts with:

And Moses spoke to the Israelites…This is the beginning of a couple of verses in the Torah, Lev 24:23; Num 9:4; 17:6) but the cantor does not chant Torah. He chants part of a medieval hymn,

Come my beloved, to greet the bride, and welcome Shabbat. That song would not be composed for more than a thousand years yet and would be sung on Friday night as Shabbat breaks, not afterwards on Saturday as depicted. Jesus is called to the bema to read from the scroll of Isaiah with the words “y’amod Jesus.” However, his Hebrew name includes his father’s name. No Jew is called to the bema or Torah without a full name – naming practices vary contemporarily with regard to including mothers but in the first century Jesus would have been called up as “Yeshua ben Yosef.” Omitting his father’s name is tantamount to calling him a bastard. While there are scenes in the gospels in which Jesus’ paternity is questioned and challenged, this is not one of them.

The lethal legacy of anti-Judaism means that Christians cannot be cavalier about misrepresentations of Judaism with any ethical integrity. Johanna van Wijk-Bos writes convictingly in the preface to her 2005 Making Wise the Simple: The Torah in Christian Faith and Practice, “After Auschwitz” Christian teaching and preaching must take place in the light of what was perpetrated in Christian lands by Christian hands, and must take account of the ultimate consequences of Christian “teaching of contempt” for Judaisam and the Jews. (p xviii)

Theologically speaking, Jesus was and is still a Jew – from the perspective of a confessing Christian who believes that he is very much alive. Jesus’ Judaism is manifest in his teaching and preaching, and in his love of God and for scripture. Historically speaking, the processes by which the followers of Jesus became known as Christians, distinct from Jews and primarily Gentile took centuries and included many reversals and struggles.

Emptying Jesus of Nazareth of his ethnic and religious identity and their markers leaves a hollow shell that can be filled with anything at all – insert dominant culture here – and devalues and denies the specificity of the Incarnation.