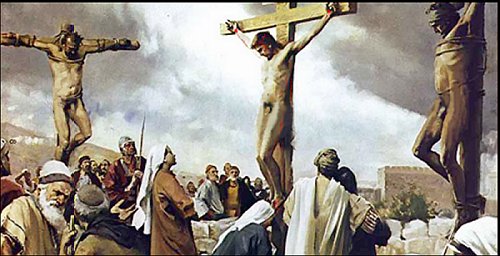 On this Good Friday as on many before, I consider anew the full range of torture and humiliation to which Jesus of Nazareth was subjected, physical and sexual. The latter is so traumatizing for the Church that we have covered it up – literally – covering Jesus’ genitals on our crucifixes. But the Romans (and others) who used crucifixion as more than a form of execution, as a form of state-sponsored terrorism – really lynching – to control subject populations were not inclined to respect the human or religious dignity, culture or customs of their targets.

The mocking, taunting, forced stripping of Jesus was a sexual assault. He was, as so many of us are – women and men, children and adult – vulnerable to those who used physical force against him in whatever way they chose. Those who rush to say but he wasn’t raped, or at least he wasn’t raped miss the point. (And we don’t know that he wasn’t. We can only say the Gospels do not say that he was. But would they?) The combination of various forms of sexualized violence and lethal violence are potent dehumanizing expressions of dominance as in ritual castrations combined with lynching in the American South – and North. 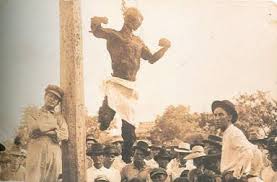 It is hard to think of Jesus that way. Hard to find images that preserve that historical perspective. (I couldn’t find any nudes that also portrayed him as a Semitic, Afro-Asiatic, man.) An internet search is not for the faint of heart. The sexualization of a bound man or woman is an obvious and a familiar trope in pornography. The association of Jesus with BDSM (bondage, discipline/domination, submission/sadomasochism) is horrifying (for me and for many others, but clearly not for all). The line between consensual sexual encounters and assault and sexualized murder is crystal clear for me. Crucifixion, like all forms of lynching, is depraved and should make us uncomfortable whatever our sexual pleasures.

There is so much shame associated with sex for so many Christians and those who lead, teach and preach in Christian communities, and that shame is regularly heaped on women and gay or effeminate men. Yet the scandal – and it is scandalous – of the Incarnation is that God pulsed into this world between a woman’s thighs, in not only the spit and shit of a stable, but passed through her vagina, as Bro. Cornell West says located “between the orifices for urine and excrement.”

Jesus has been carefully shielded from female and male genitalia in the tradition ever since. The idea of Jesus being in either a heterosexual or homosexual relationships are both anathema for many Christians. Even the notion of Jesus’ own human sexual development  – erections and nocturnal emissions – is taboo. And what of his own actions? Could Jesus be fully human as a teenaged boy and man without ever fantasizing or masturbating? If he was truly unmarried in a culture that married teenagers off as soon as they went through puberty in lieu of birth control because there was no controlling those hormones, how did Jesus deal with his own, natural, healthy, God-given sexual desires?

Celibacy is a powerful, counter-cultural witness in our world and in the time of Jesus. And at its best it is a mature affirmation of a life fully dedicated to God (in Christian tradition), building families through love and spiritual kinship. Celibacy doesn’t make a person asexual. But sexual difference can make someone a target for sexual violence. The exposure of Jesus’ naked body on the cross was a particular shaming targeting a man who was not normatively, heteronormatively, coupled.

I always think of the beginning of Jesus’ (human) life as we memorialize its end because the Feast of the Annunciation, marking the beginning of the miraculous pregnancy that produced him regularly occurs during Holy Week as it did this year (on Monday, the day after Palm Sunday). Sometimes it falls on Good Friday.

Tradition says the Virgin’s conception of Jesus was absent sexual pleasure – and there are those who deny her a healthy sexual relationship with her own husband. The child of her body, the Blessed Ever Virgin Mary or Ever Blessed Virgin Mary – is it her blessedness or her virginity that is perpetual? – depends on where in the Protestant /Catholic divide you fall. (Here I am a Protestant.) Yeshua ben Miryam l’Natzeret, Jesus, Mary’s child of Nazareth is the Son of Woman as surely as he is the Son of God. Her humanity was his humanity in his birth and in his death. Jesus’ death was a parody of his birth, at his crucifixion he was as naked as the day he was born, and again covered in blood and water, but dead when his body was placed in his mother’s arms and his head laid on her long-empty breasts.