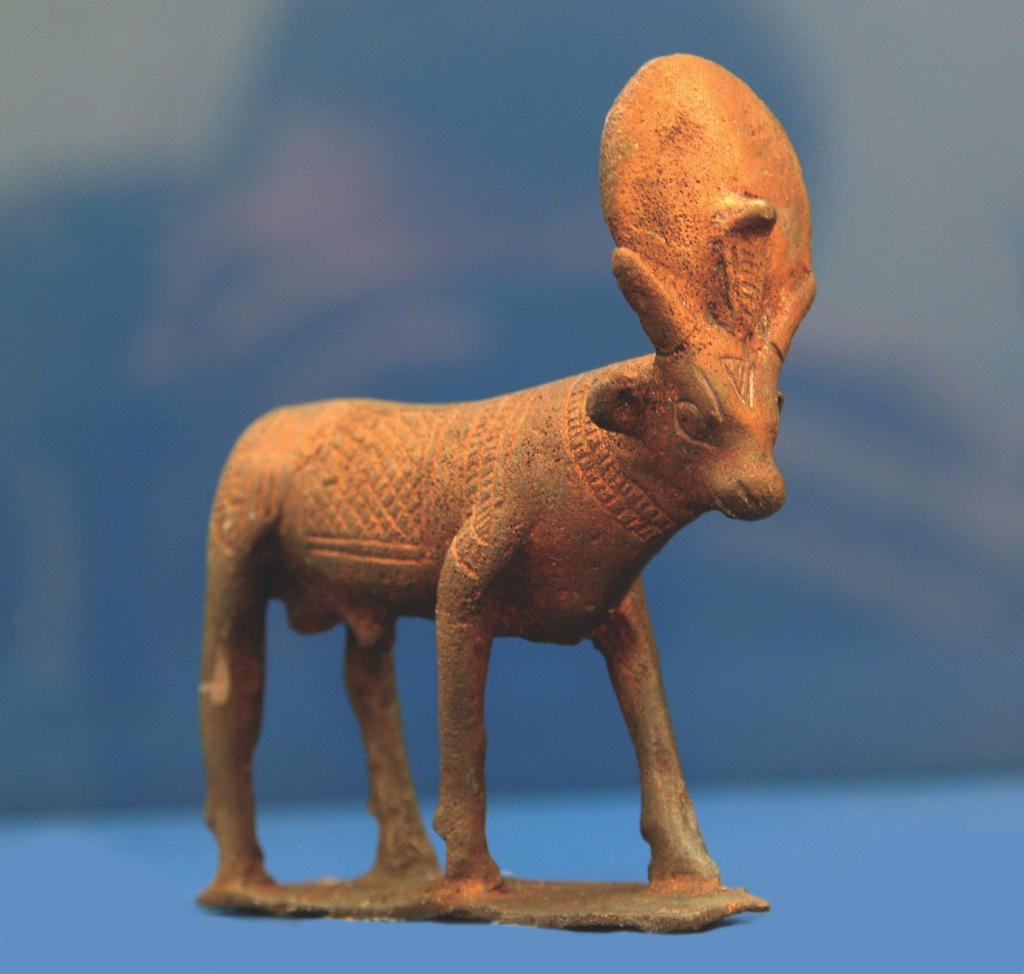 Moses came down from the mountain where he experienced the glory of God face to face to discover that there was some bull in the Israelite community. They were worshipping bull at the foot of God’s holy mountain. They had their bull all up in God’s face when they said, “These are your gods, O Israel, who brought you up out of the land of Egypt!”

We have our own bull in the church. Who are the idol-makers in the church? There’s a lot of bull in the church. And we know better. We have three thousand years of faith stories to tell us who God is. And we have more than these sacred stories our ancestors passed down. We have our experiences of and with God. We have what our eyes have seen. We know who God is and we know there is no substitute for God. We have no excuse for bowing down before that which we know is not God.

And at the same time, I have a lot of sympathy for the Israelites here. Really. I know the bull is problematic, but there is more to the story. They had stories of God. And they had their ancestors’ experiences of God. And they had their own hard experiences. They were enslaved for centuries. Elders watched their children and grandchildren be born into the same brutal estate in which they would die, dreaming of but never seeing freedom. We don’t always get our prayers answered, for us, in our generation. Sometimes the beneficiaries of our prayers are the next generation, people we may not even get to meet. For every Israelite who marched out with Moses there were entire families dead and buried who did not live to see that day. God did not save them. God did not free them. Some of them surely gave up on God who seemed to have given up on them.

And then this man Moses came along. He was one of them but he didn’t share their fate. He didn’t live under the lash. He wasn’t kept hungry enough to work but not full enough to rise up. But living like a prince wasn’t good enough for him; he threw away the good life and ran off to have one adventure after another. And now, here he is saying the God of your ancestors, our ancestors, spoke to me. Oh, he had signs and wonders, but so did Pharaoh’s magicians.

Somehow he convinced Pharaoh to let the people go. Maybe it was the power of God. Surely God opened the waters like that. But why didn’t the pillar of cloud and fire take them straight to freedom, blazing a path across the desert? Was God lost? Because Moses sure was. They should have been able to cross the Sinai desert in eleven days. Even going to Mt. Sinai first should have not even taken a month. Yet it would take them forty years, walking over their own footsteps, passing under Canaan then crossing the river from the other side. Two months into the journey they ran out of food, (Ex 16). They ate up their few provisions, went hungry and thirsty, and the solution was hitting a rock (Ex 17:1-7), scraping up something that was probably an insect by-product, and happening across the occasional flock of quails. They are hungry and frightened. They had just escaped slavery and no one knew how long that would last. The world’s greatest army is on their track.

Along the way they were attacked by the Amalekites who were supposed to be their kinfolk, (Ex 17:8). Moses didn’t lead them to freedom. He led them in circles, to hunger, thirst, and war. Then there was the gossip about Moses. He sent his wife packing and her father publically brought her back to him, (Ex 18:2). Maybe he got lost because he was preoccupied. All of that in the first three months, (Ex 19:1).

But then again, there was that moment at Sinai when they saw a mountain that was not a volcano on fire, and they heard thunder and trumpets from heaven playing a duet while lightning danced a solo. They heard God declaim the Ten Commandments for themselves. They stayed in that place, in sight of the mountain that quaked and smoked for a long time. While Moses and God discussed the fine points of nation and community building and worship and liturgy they were on their own. In the inhospitable desert. No closer to freedom.

No one had seen Moses in days, weeks, or even longer. According to Exodus 24:18 Moses was with God for forty days and forty nights which is the Hebrew equivalent of a month of Sundays. God and Moses promised the people a land flowing with milk and honey but they are still here in the desert and as our lesson says, no one knew what happened to Moses, if he was alive or dead on that mountain. They gave up on him, and God.

We can say what they woulda, shoulda, oughta do. But we have our own bull. Our idols are not statues or icons—though sometimes the liturgy can be an idol in the Episcopal Church. The bull we worship is whiteness and patriarchy and sexism and guns and money and fame and power and sex and our imaginations about how it used to never be and never will be again… We worship other people’s opinions and their possessions and our own. We worship people who don’t love us or even respect us. We devote our time, our money, our resources, our passion to everyone and everything but God, sometimes. Sometimes. American bull has become the church’s bull. We worship anthems and flags idolizing patriotism, sometimes even in church. And yet none of these things, like Israel’s bull is inherently evil. It is our worship of them. Prioritizing them over God and God’s priorities, the flourishing and wellbeing of God’s children, starting with the least, the last and the lost.

Now Aaron and the guys built this bull trying to connect to the One who had brought them this far. They weren’t really looking for another God. They just didn’t know how to be in relationship with the God who seemed so distant even though they were at the foot of God’s mountain. They had become so dependent on Moses they didn’t think they could speak to or hear from God without him. Aaron had already been ordained a priest, (Ex 28:41). It’s safe to say he failed his first parish assignment. And where was the prophet Miriam? The text says Aaron sent the men to rip out, פרק, not just take off, the earrings of their wives, daughters, and sons. (The rabbis read this to mean that Miriam and the other women fought them but lost.)

Then God, God starting snorting just like a bull. There’s a reason the Israelites so often identified God as a bull. In the old written language before the more familiar Hebrew letters, the first sign in the word God was an image of a bull. And when the text talks about God’s wrath burning hot, the literal expression is God’s nose or nostrils, just like a bull. God is so angry, smoke is pouring out of God’s nostrils. Add to that, in the text, God is rather bull headed. Moses has to talk God out of killing the Israelites by shaming God. The Egyptians are already talking bad about you, what with the killing of the first-born and all. If you kill your own people, you’ll never live it down!

Then God changes God’s mind. Moses reminds God of God’s promises, at the same time reminding the people. I love that Moses prayed for people who were flat out wrong. He fully expected God to redeem and liberate people who were flawed and had already failed to live up to God’s expectation, because a God that expects perfection is an idol. God and Moses show the people that God hears and responds and that good prayer is sometimes giving God a piece of your mind. A God who can’t take it is an idol, not worth our worship.

False constructions of god are sculpted out of more than color and shape. For some, god is the only one who hates the folk they love to hate more than they do. God is more than our symbols, images, and language.

I don’t claim to know what God looks like. But I know who God is. God is a pillar of smoke by day and tower of fire by night. God is a rock in a weary land. God is mother to the motherless and a father the fatherless. God is the restorer of broken hearts, minds and bodies. God is an outstretched wing and a strong right arm. God is shepherd and sacrificial lamb. God is a still, small voice and the sound of roaring thunder.

God is Sovereign, Savior and Shelter. God is the Author, the Word and the Translator. God is Earth-Maker, Pain-Bearer and Life-Giver. God is Majesty, Mercy and Mystery. God is Divine Love, the Eternal Beloved, and the Faithful Lover. God is. God is beyond all language and imagination.

A God who is anything less than Life, Liberation and, Love is an idol and that is some bull. The Israelites would continue to build bulls, some as God and some as thrones for God. We are not much different. Who are the idol-makers in the church? Who is bringing bull into the church? And perhaps more importantly, how do we clean it up?

In the Name of God, Potter, Vessel, and Holy Fire. Amen.