You know you want it. You’re so thirsty. It’s all you can think about. You’re just thirsty.

Some may know that the word thirst denotes much more than longing for water. It speaks of a deep craving, one might even say a carnal craving.

Thirst is a primeval biological imperative. Thirst is a reminder that your life is fragile. Neglecting your thirst can have dangerous, even deadly consequences. Satisfying your thirst will save your life. Maybe not in that moment but it provides your body what it needs to keep accelerated death processes at bay—I say accelerated because we are all actively dying, and on the way to our journey’s end, which is not the end.

Thirst is an equalizer on the scale of death. All humans, all animals, all plants, thirst. All forms of life that we know thirst for something that will sustain such life as they possess. All of us will die if we do not quench our thirst. Thirst is more lethal than hunger. A person can survive much longer without food than without liquids.

But not all liquids are created equal. While some swear by Gatorade and others like a Red Bull now and then, (and Ty is having a long-term relationship with Diet Coke), and others keep a personal flask at hand so they’re never without their drink of choice, there is nothing on, above or below the face of the earth like water.

We are made of water. Some of us were recently reminded with ashes that from the dust we have come and to the dust we shall return. Some were reminded with glitter that we are star stuff. Dust and ashes, starlight and glitter, yet we are still more water than any of these.

Our ancestral story in Genesis tells us we were crafted from soil that was formed when the sea waters were called to assemble leaving dry land exposed. Science tells us all life evolved from the waters of the seas.

When we thirst we crave that which we are.

In this day and age, it is so easy for most of us to satisfy our thirst. Potable water is all around us, brought to our homes and jobs and schools and sanctuaries and any other place we might find ourselves, including fountains outdoors with bowls for our fur friends and family.

But we don’t have to drink that water. We can buy water we think tastes more like what water should taste like. We can buy flavored water and vitamin water and carbonated water.

For most of us that is true. But it has been 1044 days since [21 April 2014] the government of Michigan poisoned their people in Flint, and they still do not all have clean water to drink. The water protectors of the Lakota peoples are trying to protect the waters that feed not only their homes, but sustain the life of the world – waters that are in danger because the North Dakota Access Pipeline was routed away from the suburbs out of fear of what an oil spill might do to their land and water supply, and rerouted towards what remains of native land under native control because they and their children are expendable and oil is more valuable than water to some folk.

But you can’t drink oil. Our treatment of this planet may well result in all of us being thirsty with an unquenchable thirst particularly without a functional Environmental Protection Agency in this country under the current regime.

Thirst is maddening. Thirst makes people desperate. Out of desperation, sailors stranded at sea without fresh water drink salt water knowing it could cause their deaths, but they cannot resist the thirst. Migrants crossing into this country looking for a better life sometimes lose their lives to thirst, or violent quarrels over what ever liquids they have, some even consuming their own bodies’ wastewater. And while decent folk leave water for these desperate souls out in the desert, against the law, border agents seize and pour it out into the dirt. Life giving water, sinking back into the earth from which it has come without ever nourishing or saving a life.

Today we have the story of another group of migrants. They had just started out on their trek. In the previous chapter they had had some kind of feast, chicken of the desert and biscuits from heaven. But roasted quail can be salty and bread—even if it did fall from heaven—can be dry. The people were thirsty.

And Moses didn’t have any water to give to them. He was their leader. Or was he?

Miriam and Moses, his sister-prophet were on this journey with their people. They were all in this together. A common basic humanity unites pastor and people the same way mortality unites shepherd and sheep. Moses and Miriam—whom our text neglects—were leading the people, but their leadership looked more like followship. They were following God and trusting her to provide for her people. According to Jewish tradition, God provided water through Miriam, she always knew where to find it because it was God’s gift to her people through her.

But in this story, Miriam is silent and her well is missing. Perhaps one lesson of this story is when women are written out, counted out, put out and kept out, communities, congregations, societies, nations and the world suffer a loss that will lead to their demise. We cannot survive without the gifts of women any more than we can live without water. All of the hierarchical and patriarchal organizations, institutions and structures that keep women out of power, and try to keep us in an imaginary place are built on women’s unacknowledged labor, intellect, and our money without which they could not survive.

Moses became what he was because his mother Yocheved made her own reproductive choices, saved his life from a state that had a cradle to grave pipeline with the help of a community of women: the midwives Shiphrah and Puah who organized the resistance, his sister Miriam who shepherded him before he became a shepherd, and his wife Zipporah who stood in the face of God and snatched his life back from the gates of death. Oh, if it weren’t for the women… Now those women and their children are thirsty and the people are looking to him to do what Miriam did. But he didn’t have Miram’s gifts.

Moses hadn’t been in the God game long but he had some experiences with and of God. He knew what he had seen, a bush that burned and was not consumed, staffs turning to serpents and eating other serpents that had been staffs, plagues of blood and boils, frogs and flies, and death, dust and disease. He had seen the seas crack open and the dry land appear; he had walked on that land from slavery to freedom behind Miriam who led the way. And right now he was looking at a pillar of cloud guiding his way. He knew what he had heard: I am that I am and I will be what I will be. I am with you. And he knew what he believed: God was able to deliver her people. He believed God would lead her people to safety, he believed God would provide food for her children—out of thin air if necessary, because she had just done so, and Moses believed God would provide water in the desert.

The essence of Moses’s leadership was trust that God was who she said she was and that she could and would do what she said she would do. Moses spoke for God because he had been speaking with God; he spoke from a position of deep trust and intimacy.

That intimacy was not limited to Moses. The writers and editors of the scriptures saw hierarchy in everything and crafted portrayals of God that fit their understanding. But the God I know does not love the one whose name is called more than the one whose name is forgotten. The intimacy of God and Moses was special but God’s love is abundant, inexhaustible, ever-present and free to all without precondition.

They turned to Moses because they had not yet learned to turn to God for themselves. They knew that Moses met God on a mountain one day and was changed forever. And until the people had their own moment of change they looked to him to mediate between them and God. But I’m so glad this morning, that I don’t have to rely on anyone, woman or man, prophet or pastor to speak to God for me.

Moses turned to God, the God of creation, the God of Exodus, the God of Sinai, his mama’s God, his wife’s God and his God. And God said: I will be there with you. I will go before you and stand before you so that whatever you face, you will not face it alone. I won’t say that you’ll never be hungry or thirsty, but I will provide what you need through you or someone else, and it falls to you to share what I provide with those in need.

Moses struck the rock as he had been told and there was water, the source of life, pouring forth from the rock. But Moses didn’t keep that water for himself. He didn’t charge the people for access. He didn’t check their papers to see if they were Israelites or some of the other folk who left Egypt with them. He didn’t build a wall around God’s life-giving water. He didn’t dump chemicals into God’s fountain.

Moses let God use him and the resources he had—the riches of his relationship with God and the staff that God had given him—he gave it all back to God and someone else who had a need got their need met. There was water for everyone. Moses was the only one with a special staff but he offered it up, not knowing if it would be smashed on the rock and he would lose it forever. He gave his gifts back to God and the power of God was revealed, one more time.

What are you thirsty for today? What will you do to quench your thirst? What gifts will you bring to help someone else quench their thirst? And where will you go once you realize there are some thirsts water cannot quench? 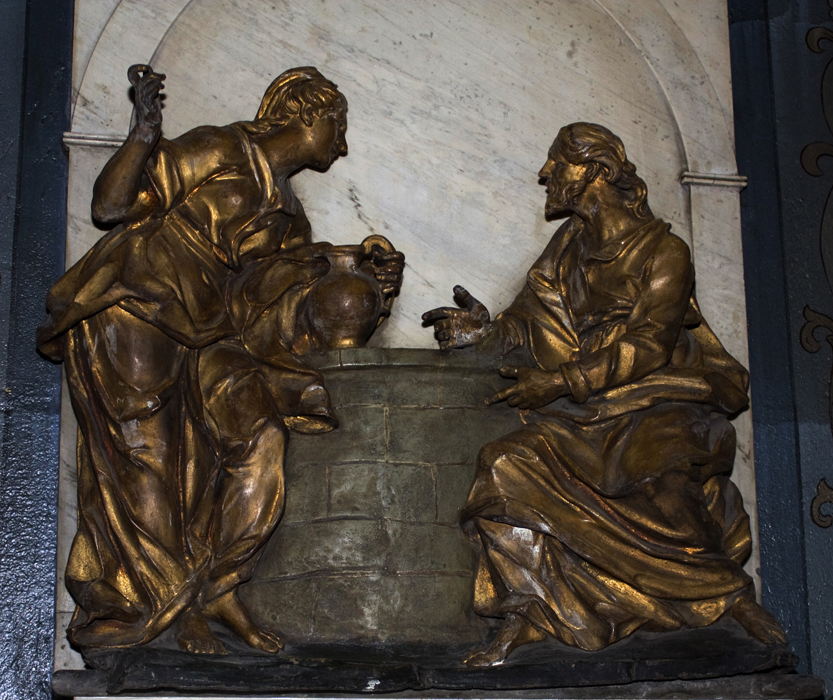 In the gospel that will be read in many churches today, Jesus meets a woman at a well where water is freely available. Some folk at that well spend their time passing judgment on other folk who are drinking from the same well as they are. And Jesus shows up. Jesus shows up in the place where private lives become public fodder and stories of betrayal and broken hearts come bubbling up like water from the rock. Jesus is there in the place where people have different understandings of God and scripture, welcoming all. Jesus is there in the place where those who have been stigmatized and isolated because of who they loved and how they loved, thirst.

And to them and to us, Jesus offers water from a well that will never run dry, water that nurtures and sustains our life in this world and the next. Miriam’s well passed from this world when she did. Moses and his staff are long gone. He who was born in water and blood from the womb of Miriam of Nazareth, offers us the waters of life that we might live and love, fully and freely. Amen.