Resistance Is Not Futile

Resistance Is Not Futile 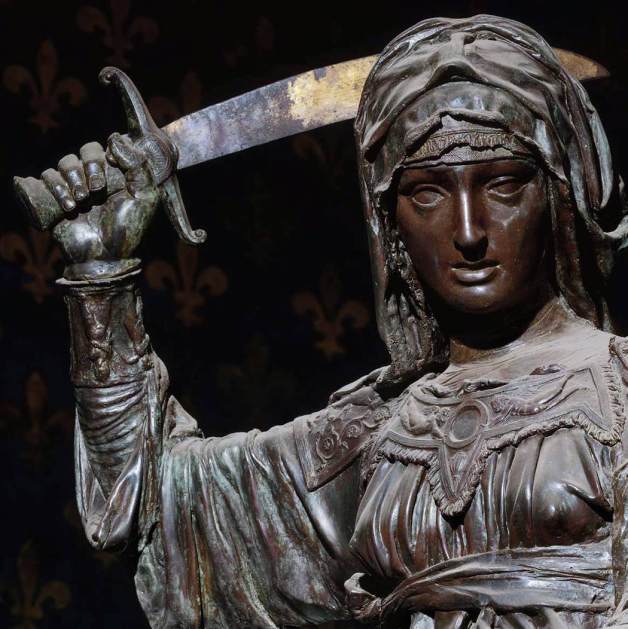 Resistance is Not Futile

#Resist. There was a man who rose to great power and became very wealthy along the way. He expected his whims to be met with instant acquiescence and held grudges against those who did not comply. He kept lists of his enemies and used his power to destroy those who defied him. I’m talking about Nebuchadnezzar as he’s portrayed in the book of Judith, but since Judith is scripture and scripture lives and speaks beyond its originating context, surely these sacred words speak to today when grudge-holding tyrants target those who didn’t support them fully or soon enough or contradict them or mock them.

The tyrant in this story set his sights on Judith’s people and her land. Judith can be read as an archetype for the land of Judea, the Jewish people, Jewish womanhood or Jane Q. Public, make that Judith Q. Jewish Public. Yehudit, the feminine of Yehudah, Judah—also feminine in form reminding us gender is more complicated than binaries even in binary languages and systems—Yehudit, Judith, is the quintessential Jewish woman. She is Daughter Zion herself or just a faithful daughter of Zion. More importantly, Judith is not captive Daughter Zion; Judith is the resistance of Zion; she is an agent-provocateur, a provocatrix. She is a woman who resists tyranny because she knows resistance is not futile; it is essential.

The tyrant sent his second-in-command, Holofernes, to do his will. Some quibble over the historicity of Judith, and characters like Holofernes, I am not among them. Judith may well be less historical than other biblical texts, and more so than yet others. What is sure is that scripture, in or out of the book of Judith, does not have to be historical to be true. Judith is true in more ways than one. Take the tyrant’s second-in-command. A whole lot of folk are exorcized about the tyrant in the story and the modern day exemplar he may evoke, but they forget that tyrants are not singular occurrences. They are the fruit of tyranny, nurtured, cultivated, harvested and deployed. And, they are waiting in line, waiting in the wings, waiting for their shot. That’s why empires don’t die when emperors do. Tyranny’s bench is deep. Tyranny survives violent upheaval even when tyrants and their functionaries are swept aside and tyranny does not even blink at the peaceful transfer of power.

The tyrant in our text decided to punish the people who hadn’t stood with him in his previous campaign. (This is just the literary background of Judith, a book some folk cut out of their bibles because they couldn’t find a living word in this story about a woman who resisted tyranny with her fully sexualized woman’s body—but I’m getting ahead of myself.) The tyrant sent his second to execute his policies. They decided to deprive the people of the basic resources they needed to live, to punish them for their disloyalty. In our story the resource that is snatched back from the people is water, the very fabric of life for this earth and her creatures. Tyrants are still depriving communities and their children of water, poisoning it, rerouting it, outright stealing it and then selling it back to them befouled.

The text says that for thirty-four days Edomite and Ammonite armies that had sworn fealty to the tyrant did to Judith’s people what had surely been done to them. Don’t miss that the foot-soldiers of tyranny are often oppressed peoples themselves. Some of them have been taken captive, pressed or sold into service, but some of them have sold themselves, coveting the privilege and power of the empire that was never meant for them, which they will never be granted. It will continually be dangled before their eyes, poisonous fruit from a poisonous tree. And even though they will never get to dine at the table where tyrants dine, they will be thrown a few scraps and convince themselves that they aren’t as bad off as those the empire disdains most. And maybe if they work hard and pull themselves up by their bootstraps they too can get a seat at the table.

Then when every well was dry and humans and animals began to collapse some people said: It would be better for us to be captured by them. We shall indeed become slaves, but our lives will be spared, and we shall not witness our little ones dying before our eyes, and our wives and children drawing their last breath. (Jdt 7:27)

What they were really saying was that resistance is futile. The empire was saying submit and they were ready to say yes, not because they were cowards, not because they wanted to be collaborators, but because they were desperate. It’s easy to judge them from outside the text. But what do you do when the empire seizes the resources you need to live? What do you do when your child is lying listless, dehydrated, dying or dead and there is no water, milk or medicine? This is how empire works. Those it doesn’t destroy outright it grinds into submission, sometimes making its subjects beg for the degradation of being dominated by them.

One member of the governing council conveniently named Uzziah, God hears, begged the people to hold out a little while longer, to pray and trust God. In so doing he offers the only resistance he can muster. But he says, if God doesn’t come through, he will personally hand over whoever is left to the regime, surrender and accept whatever depredation, whatever indignity, whatever retribution the tyrant has in mind for those he governs but doesn’t consider to be his people. Uzziah doesn’t see that he has any other options if he wants to save his people. For him the paths of resistance and submission collide at the intersection where the bodies of his people lay dying. What else can he do?

Then Judith, whose sixteen-generation genealogy—the longest of any woman in scripture—which traces her back to Jacob-become-Israel through the womb of Leah, Judith began to speak. She called the members of her governing council and began her resistance by opening her mouth (sometimes you’ve got to call the folk who govern you and tell them about themselves):

Jdt 8:11 What you have said to the people today is not right; you have even sworn and pronounced this oath between God and you, promising to surrender the town to our enemies unless the Holy One turns and helps us within so many days. 12 Who are you to put God to the test today, and to set yourselves up in the place of God in human affairs? 13 You are putting the Sovereign God to the test, but you will never learn anything! 14 You cannot plumb the depths of the human heart or understand the workings of the human mind; how do you expect to search out God, who made all these things, and find out God’s mind or comprehend God’s thought?

Judith calls for prayer as an act of resistance. Her language is so powerful and compelling that the men of the governing council asked her to pray for them. They want her to pray that it might rain and buy them a little more time. But Judith understood the real fight wasn’t about the resources that the tyrant cut them off from. The issue wasn’t the tyrant’s latest tweet, plot, plan or rant. The problem was the tyrant and his tyranny. So she prayed starting with the sexual violence against women that accompanies every war. We ought not be surprised to see tyrants boasting about sexual assault as proof of the deformed manhood that passes for their twisted notion of masculinity.

Judith prayed that God would use her deceit because she didn’t plan to fight fair for she understood there were no rules of engagement that the empire would honor. Sometimes resisting the empire means doing things that will get you branded a terrorist. Judith’s ethics of resistance were revolutionary. Sometimes the only difference between a revolutionary and a terrorist is in the mouth of the one who gets to tell the story.

Judith’s prayer was an act of resistance but it wasn’t her only strategy. I believe there is a real critique to be had of folk who only talk, even if they’re talking to God and do nothing to resist that might cost them some skin. Judith put her whole skin in the game, but first she prayed the line that makes her a liberation theologian:

For your strength does not depend on numbers, nor your might on the powerful. But you are the God of the lowly, helper of the oppressed, upholder of the weak, protector of the forsaken, savior of those without hope. (Jdt 9:11)

Judith took herself to the tyrant’s camp, displayed herself before his eyes, just in reach but out of his grasp. She batted her eyelashes and stroked his ego, she told him what he wanted to hear about how he was perceived, admired and feared. She dined with him and drank with him. While he drank his private stock she drank her kosher wine and when they were through only she was still standing. She cut off his head with his own sword and put it in her little kosher dinner bag and carried it back to her people as a trophy.

Be clear, I am not calling for the assassination of tyrants in our day. We do not live in the Iron Age. The fact that our scriptures are rooted in the Iron Age does not limit us to their theology or ethics, in spite of what those who bow down at the altars of patriarchy and homophobia preach. Judith, like all scripture, offers much more than a literal paradigm to be blindly followed.

Lastly, even though empires don’t collapse upon the deaths of their tyrants, they can be dismantled and placed under new management. Resistance is not futile. Amen.

May the God of Judith and Jesus strengthen our hearts and hands for the work ahead.

May we stand with the people of God, standing for what is right.

May we resist tyranny wherever it is found.

And may we never be cut off from the water of life. Amen.

You can view the entire service here.

Postscript: There is a wonderful blog by Judith Robinson chronicling images of Judith.