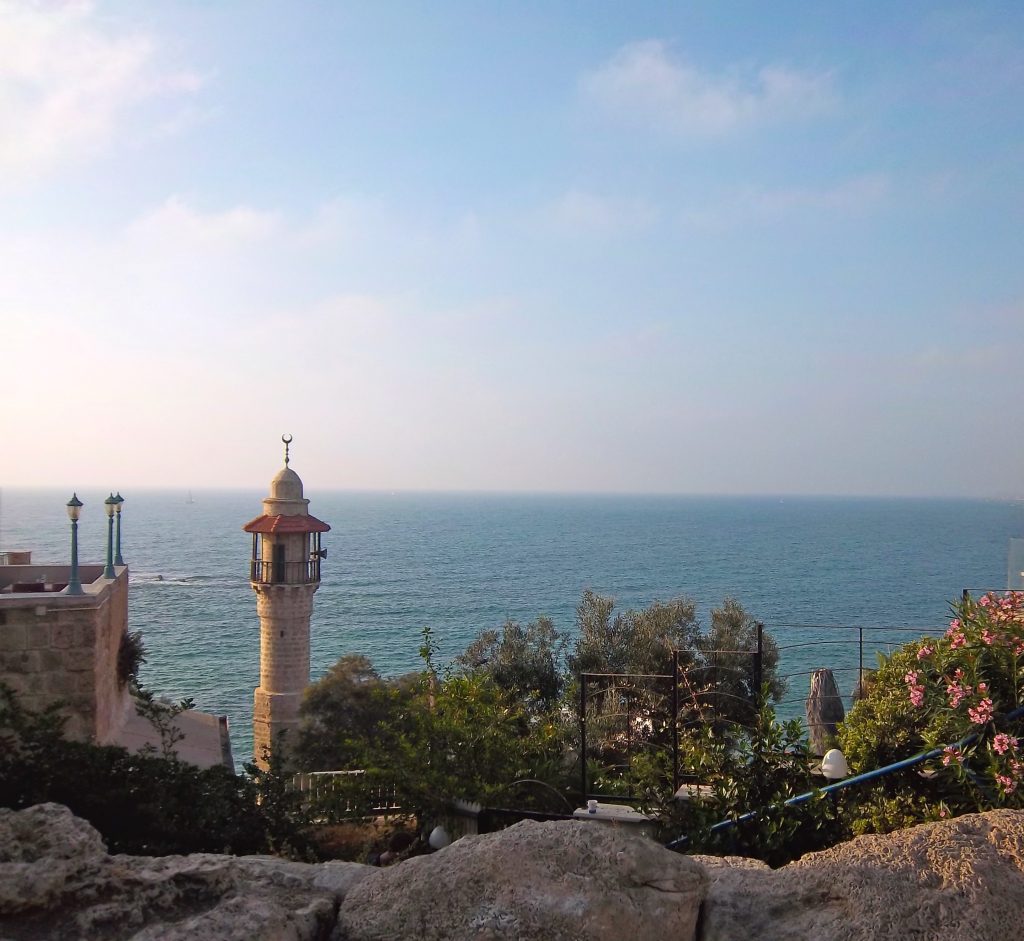 One of my favorite places in Yafo (biblical Joppa).

In the name of God who loves us, who is Love and bids us love one another. Amen.

May I tell you the truth? As a Hebrew Bible scholar I’m always offended that in some parts of Easter and Pentecost the scriptures of Jesus are declared dispensable and replaced with the Acts of the Apostles. Then, to make matters worse, today’s lectionary looks like it was put together by children throwing darts at pages of the bible. The gospel is set at the dedication of the temple, that’s Hanukah, in the dark days of December. But we’re celebrating Easter which overlaps with Passover in the flower-filled spring, not Christmas and Hanukah.

Then there’s a passage from the Revelation of John instead of an epistle. John is seeing visions of a future that people have been saying is just around the corner for two thousand years and is still not here. The book of Revelation terrifies some, confuses others and leads more than a few into heresy and conspiracy. Let me simplify it for you: The world is going to get worse before it gets better. But it will get better. The end. And then a new beginning. The whole world will be resurrected.

And there is our beloved twenty-third psalm. When Christians read the scriptures we share with Judaism we should take seriously their original context and history of interpretation, particularly since Jesus was Jewish and interprets his ancestral scriptures from that context. Which is why I tell seminarians not to share the twenty-third psalm with Jewish patients during chaplaincy rotations – it has the same effect as a chaplain saying “ashes to ashes, dust to dust” over your hospital bed. The twenty-third psalm is a funerary psalm in Judaism. The psalmist becomes a sheep and comes to the end of his life in the house of God. The sheep gets the answer to his prayer. He will dwell in the house of God all the days of his life. But the day he enters the temple will be the last day of his life. You do know what happened to sheep at the temple don’t you? Let me put it this way, they’re delicious and priests got a special cut.

At least the Acts text is an Eastertide text. It’s a resurrection story. And more. We begin with the birth of a beautiful baby girl whose parents loved her and wanted the world for her. How do I know this? All babies are beautiful and without evidence to the contrary I will believe the best about everyone. Besides, Tabitha’s parents left us some of their hopes and dreams for her and pieces of their story in their naming of her.

What’s in a name? “That which we call a rose by any other name would smell as sweet.” Tabitha’s name is revelatory. Her parents named her “Tabitha,” Tavitha, in Aramaic. They named her Tabitha, “gazelle,” strong, swift, graceful, nimble saying something of their hopes for her. They named her in Aramaic because that was the language of the empires that had dominated their people ages ago. Those empires waxed and waned but left their language behind continuing the work of colonization even as new empires and languages emerged. The imposition of Aramaic in the ancient world is not entirely dissimilar from the imposition of English in the modern world. The intentionality of her parents in naming her reminds me of the intentionality many African American families in naming their children, including creating new names out of the colonizers’ English. Even though Tabitha’s people spoke Aramaic, they still read their scriptures in Hebrew and Tabitha’s parents would have known that the Hebrew word for gazelle, zivyah, was also the name of one of Judah’s great queen mothers who ruled for her son when he ascended the throne at the tender age seven upon his father’s death.

Tabitha’s name stretches back to strength and glory, acknowledges oppression and subjugation and the ability to adapt to the present situation. Her parents gave her a name that could also be easily translated into Greek, the language of their most recent oppressors, so that when the author of Acts called her Dorcas, though he wasn’t calling her by her name he wasn’t calling her that far out of it. I have to admit that when the author switches to Dorcas in the middle of her story and never switches back, I am bothered. I think about the terrible habit some Americans have of telling people that their names are too hard or too foreign and giving them easier, English names. Whenever I read this story I think about Kunta Kinte who was willing to die and was horribly mutilated because he would not relinquish his ancestral African name and accept the slave name Toby. If you do not know who Kunta Kinte was you’re in luck, Roots has been remade and will be broadcast this summer.

The author of Acts names Tabitha something else, he names her as a disciple. In fact she is the only woman in scripture explicitly called a disciple. She is not the only woman disciple, but she is the only woman called one. Now, what the author does not say is as important as what he does say. He does not say that Peter or Paul or some other disciple – male or female – converted her. Rather he presents her as already being a disciple. She has her own faith story. I suggest that she has had her own encounter with Jesus after all, Yaffo, Joppa is only thirty-five miles away from Jerusalem and fifty-five miles from Nazareth.

Tabitha’s discipleship means serving God by serving those whom God loves. As a Jewish follower of Jesus Tabitha was living out the rabbinic principle of g’miluth hasadim “loving-kindness” as described in the sacred text of Pirke Avot (1:2): The world stands upon three things – upon Torah, upon divine service (avodah), and upon acts of loving-kindness (g’miluth hasadim). [In Hebrew Acts 9:36 describes her service to others as g’miluth hasadim, in Syriac as zedaqta, giving alms.] To be a disciple is to imitate your teacher and Tabitha imitated Christ in her love for those he loved and loves.

The story in Acts weaves all of these elements together building towards a breath-taking moment, the moment after Tabitha’s breath is taken. Tabitha is raised from the dead just as Jesus was raised. Peter raised her as Elijah raised the son of the widow in Zarephath. He raised her as Elisha raised the Shunamite woman’s son. He raised her as Jesus raised the widow’s son in Nain which was a new name for Shunem – teaching us that there are some places where the spirit is bursting out into new life and raising the dead again and again if we know where to look. And Peter raises Tabitha like Jesus raises Jairus’s daughter.

In fact Tabitha’s raising is suspiciously like the raising of Jairus’s daughter. Where Peter says “Tabitha get up,” Jesus says, “Lambkin, get up.” I know the gospel says “little girl” in Luke 8, but it’s actually “lamb” which is kind of sweet. But in Aramaic the two commands sound the same, Jesus says: Talitha qumi and Peter says Tavita qumi. Peter imitates Jesus in this miraculous moment and Tabitha imitates Jesus in her day-to-day life.

There is another act of service in the text, one that most Christians no longer practice. The author tells us that the other disciples – identified later in the text as saints and widows – washed Tabitha’s body and carried it upstairs. As he related the details of her death-narrative, the Greek-speaking Gentile author uses a masculine plural verb to describe the preparation of Tabitha’s body. Even if she had a husband, which she does not in this text, he would not have washed her. The practice of washing a body for burial was carried out by members of the same gender. It is still practiced today in Judaism, Islam and some monastic Christian communities. The community of women, called widows in the text, would have included some widowed by death, some by abandonment, some who chose celibacy, some old, some young, women who also chose to follow Christ and follow Tabitha as she followed Christ prepared her body for her burial – just as their apostolic sisters had prepared the body of Christ before his burial.

And then God through Peter called her name. What’s in a name? Each of us has a name. Israeli poet Zelda Mishlowski puts it this way: