Luke 9:28 … Jesus took with him Peter and John and James, and went up on the mountain to pray. [Audio link to sermon available here]

Now, let us pray: Holy One of Old, open our eyes that we may see. Amen.

Laissez les bon temps rouler! Let the good times roll. It’s Mardi Gras, Carnival, time. It was Mardi Gras on the mountaintop. Peter, James and John had stumbled into one heck of a party. There were strobe lights and sound effects and VIP gatecrashers. Perhaps there was even the sound of a heavenly brass band. And Peter didn’t want the party to stop. He didn’t want to come down from that mountain. He didn’t want to go back into the world below, that cold, hard, ugly world from which he came. He wanted to stay in the rarefied air of that little mountain. Perhaps, looking out over the Nazareth Valley in Galilee he recalled when Moses looked out over Canaan from Mount Nebo. I bet, he thought to himself, Moses didn’t want to come down from his mountain either. Because Moses wasn’t going into the Promised Land; in fact, he died on his mountain. It’s Mardi Gras when people live life at a frenetic pace because we remember that life is attended by death. Somewhere in the carnival crowds Baron Samedi and the angel of death await.

We’ve got some difficult days ahead. But it really doesn’t matter with me now, because I’ve been to the mountaintop. And I don’t mind. Like anybody, I would like to live a long life. Longevity has its place. But I’m not concerned about that now. I just want to do God’s will. And He’s allowed me to go up to the mountain. And I’ve looked over. And I’ve seen the Promised Land. I may not get there with you. But I want you to know tonight, that we, as a people, will get to the Promised Land!

We play that clip over and over again, marveling at the prescient prophecy. But are we less likely to dwell on what was going on at the base of that metaphorical mountain in Memphis from which Blessed Martin saw into eternity? Most folk don’t remember that in that very same sermon Martin also said:

We don’t play that clip so much. In fact, it’s hard to find an audio recording of the whole sermon. It is too easy to fix our sight on the man and his memorials. And now we have a new one that we can visit instead of doing the work that he called us to at the base of the mountain. It is much easier to look up to the top of the mountain than look down into the valley. There in Memphis the mountain of soaring oratory towered over the street protests of sanitation workers; civil servants, the poor peoples’ campaign and their integrated, interracial, multicultural allies fighting City Hall for an honest contract and more than that, fighting for recognition of the sacred worth of all human persons and the dignity of honest labor.

There are city workers and other unions all over our nation and some in our own city locked in a new generation of struggle with City Hall. And while so much has changed, in many of those struggles the basic issue of human dignity is as much at stake as it was in Martin’s day. And there are other issues. But perhaps we’d rather look to the man on the mountaintop in our memories than wrestle with the competing claims of today’s contestants when people of color can be found on both sides of the social, political and economic battle lines, some in the right and some in the wrong. And it’s not that easy to tell the good guys from the bad guys at the foot of our mountain, without the fire hoses and the German shepherds.

For more than a thousand years Christians in the Holy Land have identified Mt. Tabor as the site of the Transfiguration. While Peter is planning on continuing his Mardis Gras on the mountain, he is standing on the dust and bones of his ancestors and those of the Canaanites they defeated while following the command of the prophet Deborah, theocratic head of the confederated Israelite tribes. When Deborah and her ride-or-die chick Ya’el finished cleaning house, there was forty years of Mardi Gras in Israel after her death.

The holy ground of Mt. Tabor that Deborah purchased in blood has been made holier still by the appearance of two archetypal prophets from each end of the spectrum in Israel: Moses the Law-Giver represents proclamation prophecy; Elijah the Wonder-Worker represents performance prophecy and Jesus of Nazareth, Mary’s Child is the inheritor of both their mantles.

Who wouldn’t want to stay on the mountaintop with them? I know I wish I were there. Moshe Rabbenu, I’ve got a few questions for you: How much does the Torah passed down in your name reflect what you actually said and did and experienced? And now that you have crossed over to the other side, how much space is there between your experience and articulation of God and the God whom you now know in eternity? Why couldn’t you find a woman from your own folk you could stand long enough to marry? And is the bias against women in the Bible directly related to your domestic issues? And Elijah, I have a couple of questions for you too: how does being taken bodily up into heaven in a chariot of fire actually work? Does your body phase in and out of solid matter cohesion like in a transporter beam? Is heaven on the other side of a wormhole? When you killed the four hundred fifty prophets of Baal but not the four hundred prophets of Asherah was it because you really didn’t mind a little goddess worship on the side? Are we feminists right in saying that Asherah was just the Canaanite articulation of the Holy Spirit and not really another God? Those are just some of my questions. I don’t know if Peter had questions or if he just wanted to be in the presence of his holy and revered spiritual ancestors.

It was Mardi Gras up on that mountain and Peter wants the good times to roll on, he doesn’t want the party to stop. If he and James and John can stay up on that mountain with Jesus and Moses and Elijah there’s no telling who – or what – else might just stop by. And even if the prophets Miriam, Deborah and Huldah don’t show up, even if Isaiah and his Baby Mama don’t stop by – yeah, he had one, at least one; Peter is in the presence of the company of heaven: with prophets, apostles and martyrs – though none of them know it yet. There has never been a Mardi Gras celebration quite like this. And there never will be again, not on this side of eternity. They need to savor this moment while it lasts.

Besides, the way Jesus is going, he is going to get himself killed before he does all the things he’s been talking about. How can he usher in the reign of God if he is executed, crucified, lynched by the Romans? Jesus needs a time out. That’s it. Peter is doing this for him. Jesus needs a retreat; he needs to get away. Jesus needs time to be reminded who he is and what he’s supposed to be doing. Peter is just helping. Jesus needs to focus. Somebody’s got to take charge of this thing.

And so Peter lays the groundwork for building an institutional church on the top of the mountain, the Mardi Gras Mission. He’s already working on its architectural plans and interior design. It won’t be very big because he’s not planning on any new members; there is no evangelism in his future. Outsiders need not apply, or if they do show up, if they do take it upon themselves to climb that mountain, they will be welcome as long as they don’t disturb things too much.

But Mardi Gras doesn’t last forever. Ash Wednesday is close behind. Only a split second separates them. And so, between one breath and the next, Moses and Elijah return to glory. And Jesus leads Peter, James and John back down that mountain. Peter doesn’t want to go down into the valley of Lenten discipline and depravation. There is death and self-denial at the foot of that mountain. There is disease and demonic possession at the foot of the mountain. There’s just too much need. Too many folk and too little time. And they all want to cut in on his time with Jesus. If they just stayed on the mountaintop a little while longer they might just forget there was anybody else outside their little privileged circle, hungry, hoping, desperate, dreaming, waiting for them to come down and live the gospel.

And there, at the base of the mountain, Jesus gives them another glimpse of God. He shows them God in service. God revealed in the glory of the cloud, attended by the holy ancestors is also God who ministers to the desperately ill. Jesus came down from that mountain because his sisters and brothers needed him. I needed him. You needed him. The world needed him. We need him. And Peter and James and John needed to learn how to be the church in the valley, in the field, in the streets and in the trenches. As we descend into the Lenten valley from the mountaintop of Epiphany, may we be the ones to meet the needs we encounter. 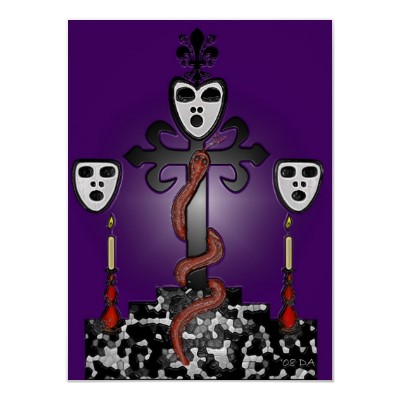 Jesus also came down from that mountain, because there was a waiting cross at the foot of that mountain, just out of sight, attending his way like Baron Samedi and the angel of death. May we follow that cross from Mardi Gras to Lent and back again, through Shadow-Valley Death to the other side where les bon temps, the good times, rouler, roll on, for eternity in that Mardi Gras without end. Amen.