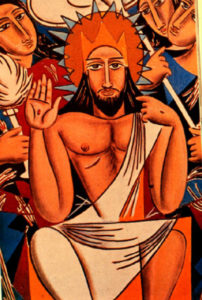 One of the Principal Feasts of the Church, the Majesty of Christ, as the feast is known in this Lectionary, is a celebration of the triumphant and transcendent Jesus who has transcended mortality and its limitations, including monarchy, a failed governance experiment. In the first lesson the remnant of Israel, the Judean monarchy, suffers a blow from which it will never recover. Christian theology proclaiming Christ as King often seeks to situate Jesus as the true monarchal heir so that the story becomes triumphant again and the liturgy celebrates the majestic reign of Jesus with God (adding the Holy Spirit to make it properly Trinitarian.)

In this Lectionary, we look at the Hebrew Bible lesson independently even when read in conversation with other lessons, the liturgy and the tradition. In the first lesson, the monarchal figure – the whole of Judah who will fall when the monarch/y does – is broken and battered and subject to a greater monarchal power – an empire – that holds the power of life and death and wields it, issuing a death sentence. That is the point at which Jesus resembles the monarchal heritage that is proclaimed for him as the Son of David. Jesus, who is also the Son of Bathsheba, is at his most majestic when he is at his most battered.

The psalm is a proclamation of the majesty of God on a cosmic scale. It is in marked contrast to the humble human person Jesus. It may bid us question the core claims of the Christian faith and the sayings of Jesus as preserved in the gospels. That Jesus is the incarnation of this God. That Jesus is the fully human and also more than human child of this God. That all of this divine majesty was mysteriously reduced to a life form that could be contained within the most intimate embrace of a woman’s body. How can these things be? This feast immediately proceeds advent so that we will have four weeks to reflect on these mysteries and think on these things.

The epistle testifies to the understanding of the earliest followers of the Jesus movement that it was an inherently scriptural Jewish movement. The author of this epistle reaches back to the time when prophets prophesied in spoken and written word, sign and wonder, promise and threat and, draws a line between those women and men and Jesus demonstrated that the world has never been without the voice of God.

In the gospel, Jesus is proclaimed king for the last time in his fully human life. It is the butt of a brutal joke accompanied by an “extravagance of violence” to borrow the phrase from Phyllis Trible. In one way, the head that bears a crown of thorns is no different than the head that bear is a crown of gold. Death comes for them all and their crowns tumble to earth. But the majesty of Christ is not dependent on crowns or, for that matter, on acclamation. The lesson ends, intentionally leaving the reader and hearer are wanting the end of the story. The best way to tell this story is from the beginning. So we will begin again in the following week by remembering the first advent of Jesus so that we might be prepared for his next one.

These readings are used for the Feast in every year of A Woman’s Lectionary for the Whole Church: