[Opening remarks at the Rainbow Theology workshop of the Consortium of Endowed Episcopal Parishes, for March 2021. Thanks to co-panelist Patrick Cheng for use of his book cover.] 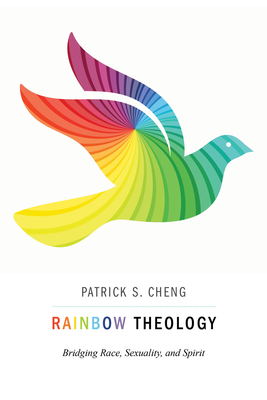 Human beings contain multitudes, multiverses, like our Creator. That she, he, they, One who is three, seven, twelve, many is ultimately inarticulable yet mysteriously, in some way reproducible. The earthling created from the earth, the human created from the humus, was soil and spirit and bone and blood. And it, they/them was gender-full and in that gender-fullness was the image and likeness of God. We who are the descendants of the keepers of that sacred story are not fully human without all that makes us human proclaimed as part of our story. We cannot truncate the lives and stories of our lesbian, gay, bisexual, transgender, queer, intersex, asexual and, non-binary kindred. In the forthcoming Women’s Lectionary, the commentary on Genesis on for the first Sunday after Christmas in Year W (a multi-gospel single year lectionary) states:

…while it makes a certain kind of sense to tell the story of the people of God genealogically, people are more than their potential to reproduce and are more gender-full than the binary acknowledges. Indeed, while the binary pair matches the binary portrait of God in Genesis 1:1 and v 2, “He, God, created,” and “She, the Spirit fluttered,” God transcends those categories and the language that would constrain God to them.

Human language in or out of the canon is insufficient to capture God and we, like biblical authors and editors, use our best but ultimately inadequate language. In its, their, gender-full creation, the first human, a non-binary person is the very image of God, the work of God’s fingers…

The multiplicity of humanness sets the stage for intersectionality. Our multiplicity is not intersectionality; intersectionality is the culmination of the oppression heaped upon each modality of our multiplicity that has been predetermined to be unworthy by a colonizing white supremacist cis-heteropatriarchal society and its structures and strictures. Silo-ing our identities fractures our humanity into dismembered bits making it intentionally harder to remember that we are the very image of God as we are, LGBTQIA and cis-het.

When we do not name ourselves or each other according to our fullness, we allow our specificity and that of our co-created kin to be swallowed up in a generic identity that rejects our very fullness. White supremacy, which I write and speak about as an entity, a demonic entity, would prefer to engage indigenous and black folk and people of color seriatim, engaging or combating one aspect of our fullness while managing, navigating, suppressing and erasing others, to maintain normative fictions.

To allow white supremacist entities and institutions to set the terms for reckoning with their own structural iniquity is to cede them more of the power that is their gluttonous diet, controlling mechanism and currency. Those of us who are called to confront, rebuke and exorcise demonic powers and principalities cannot accede to institutional insistence to move at its own stultifying pace or define any of us in their terms.

The sanctity of the whole person and that of the whole community matters to me as a womanist. Our core commitments are to the well-being, wholeness and flourishing of each other. Unlike feminism which often focuses on women’s place at the table rather than whether there should even be a table and has historically sold out to white supremacist capitalist norms, womanism requires reckoning with the whole person, the whole community. There is no reckoning with the institutional church’s transgressions against my blackness and that of my ancestors without reckoning with its transgressions against black queer people because we are one people.

My talk falls apart at this point as I engage the second prompt, “Why we care about these issues, and why TEC and CEEP should care.” Four hundred years of black preaching rhetoric and one thousand generations of ancestral spirits are not enough to equip me to explain to individuals and institutions why they should care about the wholeness of the persons in their midst, with whom they are in relationship through their shared creation and baptismal covenant. I highly doubt there are any such words so, I don’t have a “why you should care” talking point. All I can say here is the degree to which you do and do not care is already made manifest in the language you use in liturgy and on your websites and in your priorities, the way you spend your money and your time. And one more book club without any concrete action steps built in is not the way forward. Episcopalians read a lot of good books and remain unchanged, seemingly, by design.

I confess to being weary of “Difficult conversations.” In my experience they rarely go further than the next book on the list. I don’t find these conversations to be well structured either with regard to the internal discourse, often some version of “all views are valid,” or, the lack of articulated transformative action steps. I also find a lack of leadership from Episcopal and clergy staffs and vestries when the entire “conversation” is constrained to a parish or diocesan announcement and the conversation room, zoom or otherwise.

There is often a lack of intent behind these book clubs and difficult conversation enterprises. They are not entered into with intent, i.e., “We are going to have this conversation facilitated by this book in order to be a more faithful witness to God’s radical, inclusive, promiscuous love. Our goal at the end of this period of study and conversation is to articulate ten implementable strategies for our parish or diocese with 2 to 3 strategies that can be implemented immediately such as expanding our language for divinity and humanity in all parish and diocesan communications and publications including in our liturgy and on our website.”  Some will say that is hard, too hard to be a starting point. To which I say, “so what.” God did not call us to a life of ease on this side of the river.

I use the example of our language because I have made the argument as a woman that you tell me what you think about me by how you talk about God in whose image I am created. If your language about God does not include my creation, that tells me that you do not see God when you see me and you do not see me in God. This is also true for lesbian, gay, bisexual, transgender, intersex and asexual people. If your entire theological and linguistic framework is binary, then there is no room for the fullness of God’s creative artistry with the human palette. I would rather have a diocese or congregation say we are not going to change or even discuss our language or imagery and be public about it so that I know where they stand rather than have a series of unending “difficult conversations.”

What would a penitent Lenten response to these things look like? Firstly, I question whether we are even at the point of penitence. In a previous lecture on why “racial reconciliation” should not be on the table or even in our lexicons at this point — and I am glad that that false start was not the framework for this gathering — I generated a rubric for how we might get there if that were at all possible: conviction, confession, repentance, reparation and then, we could talk about reconciliation. “Reckoning,” our common language this week, seems to me to be a generative force that might yield conviction. In the black church of my formation, conviction was the work of the Holy Spirit. However, I am convinced that white supremacy and cis-heteropatriarchy harden the heart with layers of self-reflective idolatry that buffer the promptings of the Spirit until it is no more than an annoying buzz that can be re-interpreted as a chamber echo.

What then would a penitent Lenten response to these things look like? Following the model of the sacrament, it is not the sinner who chooses his own penitence rather the pastor of their soul who seeks their wholeness who imposes the task they must undertake when perceiving that their confession bears the mark of true repentance and is not accompanied by a press release.

With regard to the language our church uses, I offer away forward in the preaching commentary on the Trinity Sunday texts I chose for each year of the Women’s Lectionary:

For those who do not hear their pronouns invoke their creation as imago dei in the language of the Church, trinitarian language and the observance of Trinity Sunday remain a sanctified proclamation of male divinity. For this reason, this project offers more ways to name God, drawn from the scriptures.

Finally, as it pertains to humanity, in the Year W commentary on Advent 1: All of God’s creation is good and beloved; this extends to the earth and her creatures and all of God’s children, daughters and sons – and considering the gender-full first human – nonbinary siblings alike.