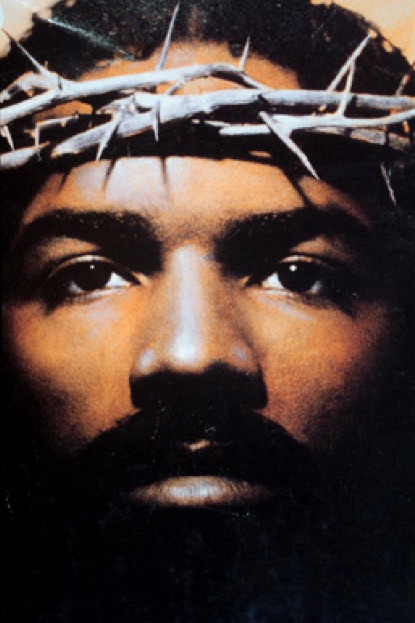 Welcome to Trinity on the last Sunday of the Christian calendar, the Sunday in which we proclaim Christ’s sovereignty and wrestle with the limitations of human language.

May God who is Majesty, Mercy, and Mystery travel with us from cradle to cross. Amen.

Our lessons are trying to do two things, end the year with and exaltation of Christ and set the stage to tell the story again in the new year which begins on the first Sunday of Advent. So don’t forget to say Happy New Year next week. The Church traditionally calls this Sunday Christ the King. Some call it the Reign of Christ. And a whole bunch of us don’t know what to call it. The word king just sticks in the craw. It comes with so much baggage.

We start with the myth of David. Having just come from Thanksgiving where the myth of hungry pilgrims and friendly natives crowds out ugly truths like settler colonialism, conquest, genocide, land theft, rape, and when things got really bad, cannibalism. We understand that the stories we tell ourselves and our children about Thanksgiving are strategically incomplete or often just flat out wrong, but the myth endures. It speaks to something in us, so we cling so some shreds of the story that may have historicity and close our eyes to the rest. And if we did that here in Fort Worth, we did it on Wichita and Comanche land.

Similarly, the Church turns to mythos of David to exalt Jesus. We don’t turn to the David who raped Bathsheba; or handed his nephews over to be lynched to pay for blood he spilled, or who killed children with their mothers and fathers while stealing all of their possessions. Instead, we turn to the David whom God chose for greatness, to whom God made promises that speak to us across time. There is danger in telling one story without the other. And I believe, in crowning Jesus with the bloody crown of David.

To be fair, I don’t imagine that David was much worse than any other Bronze or Iron Age monarch. They were all thugs and warlords, who took what they wanted. We have a bad habit or romanticizing monarchy, past and present. We see the glittering crown jewels and ignore their theft from the forcibly subjugated colonies and all the slavery and death that clings to them. King is entirely to violent a title with which to crown Jesus from my perspective. David’s crown was drenched in the blood of his enemies. The blood on Jesus’ crown was his own. Besides which, we seem to have forgotten that a king is a human monarch and by definition is fatally flawed.

Our Psalm celebrates David for bringing the Ark of the Covenant, God’s throne on earth, to Jerusalem so that in time it could be enshrined in the temple built by his son. And then there is God’s promise, God’s conditional promise, to David: One of the sons of your body I will set on your throne.If (everybody say if) If your sons keep my covenant and my decrees that I shall teach them, their sons also, forevermore, shall sit on your throne. However within two generations David’s kingdom was ripped apart. Five hundred years later, it ceased to exist. The Maccabees and the Herods would rule as kings but neither group were descended from David.

Jesus’ descent from David fired the imaginations of his followers and interpreters, some looking backwards to a kingdom that would never rise again–like the old south–rather than towards the new world of which Jesus spoke. That gets further complicated by the fact that Jesus and the gospels use the language of king and kingdom. Yet at every turn Jesus says something to the effect of that’s not what I mean by kingdom. He and his biographers used the old language, the language with which folk were most familiar to usher in a world view that transcends both this world and its deeply impoverished language. A kingdom is a patch of land and Jesus is talking about another world–not necessarily another planet, but I’m not ruling it out–but an entirely new reality that has no need for skull crushing monarchs and their axe swinging troops to keep the “peace.”

Jesus says, You say that I am a king. But this is why I was born and why I came into the world, to testify to the truth. That truth is that God is not an old man on a throne, white or otherwise. God is not a bigger, badder, richer, more powerful, king, tyrant, warlord, or chieftain. Human systems of power and dominion are not accurate reflections of God’s way of being in the world. That truth to which Jesus testifies with his being is that the God who cannot be fully known in any word of human devising is here with us, on this planet, in this world. God is with us. God is not in the palace. God is in the street. In Jesus God was not reclining on the throne of the king but rather subject to the king’s justice, stretched out on a Roman cross with a crown of thorns beaten into his skull.

We proclaim the sovereignty and majesty of Christ today as a way of proclaiming our faith that Jesus is God incarnate and that God is sovereign over all the worlds, all that was, all that is, all that will be, all that can be, all that we can imagine and that which we cannot conceive. In short, we say Christ is King because we say God is King. In so doing, we neglect one crucial fact: God is not a king. At best, our ancestors simply lacked the imagination and language to describe God other than in human terms.

At worst, by giving God a title they reserved for themselves, human men gave voice to their secret wish to be idolized. In the ancient Afro-Asian context in which this the scriptures are set, a king is a warlord who batters his opponent to submission. Kings didn’t lead from the back like presidents and generals in secret bunkers and protected command and control centers. They led in the slaughter, hacking and clubbing their enemies to death, treading through the brains and blood of the slaughtered, building monuments out of their bones. That is not God. Kings schemed against their fellow–and occasional sister–kings; they stole each other’s land, enslaved each other’s people, raped each other’s daughters and sons. That is not God.

Like God, Jesus transcends all of our language, petty ambitions, and self-aggrandizing titles. We need new language for Jesus and God and Jesus as God that is not rooted in vengeance and violence, submission and slaughter, or domination and damnation. We need to employ a little sanctified imagination and call God by names that allow us to see ourselves in her but don’t reduce her to paradigms we know have failed. But all we have is these human tongues and colonized imaginations. As parents and teachers have often said, “Use your words.” Use your wholly inadequate human words and know that they are insufficient because God is more. But even with our limitations we can craft language for God that is not rooted in slavery and subjugation like lord and king. Drawing on the spirit of my ancestors I will say God is a mother to the motherless and a father to the fatherless. God is a doctor in the sickroom and a lawyer in the courtroom. God is the one who brings us to life, calls us to freedom, and moves between us with love.

And God is available to any and everyone whether warrior, prophet, king, laborer, immigrant, transchild, felon, politician, trafficked woman, president, pastor, professor or seminarian, patriarchal misogynist or white supremacist, once we understand that the titles with which we have crowned ourselves and in which we name God in our image become idols. God is the living God and Risen Christ in our midst, reigning over the commonwealth of God in this world and in the next. Amen.