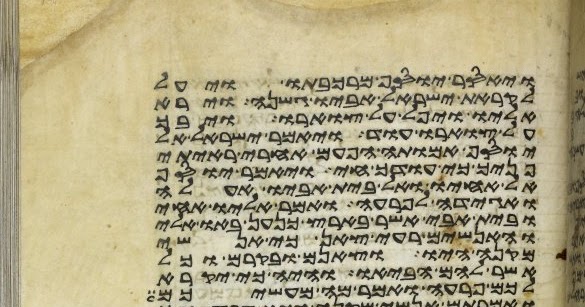 Today’s lessons offer the perfect paradox for interpreters of scripture, Deut 4:2 You must neither add anything to what I command you nor take away anything from it… The Samaritan Jews take this torah literally—do not add anything to the canon. So their bible, the Samaritan Pentateuch ends with Deuteronomy. There are no Prophets; there are no Writings. This is only one of the issues at stake when Jesus talked to the Samarian woman at the well in Sunday’s gospel. There are also significant differences between the two Torahs which she likely knew. When she said we worship on this mountain, meaning Mt. Gerizim, she was referring to the site of the Samaritan temple. And the temple was on that site because Deut 27:4 identifies Gerizim as the place where the Israelites built their first alter upon entering Canaan. That’s what it says in the Samaritan Pentateuch. In the Judean Torah that we share, it says Mt. Ebal. And history and scholarship have born out that the minority tradition, the Samaritan tradition, is right.

You must neither add anything to what I command you nor take away anything from it… The paradox inherent in this text is revealed in the continuing development, canonization and interpretation of the scriptures by other communities of its adherents: the Prophets, the Hebrew Writings, the Greek Writings, and then Christians got our hands on it.

You must neither add anything to what I command you nor take away anything from it… Each addition seems to have had its own prohibition on revision. It is the final word.

The Judean Jews added Proverbs (30:6): Do not add to God’s words, or else God will rebuke you, and you will be found a liar. Then the Hellenistic Jews based in Africa added Sirach (42:21): God has set in order the splendors of God’s wisdom…Nothing can be added or taken away. Next, the Christians added Matthew (5:18): until heaven and earth pass away, not one letter, not one stroke of a letter, will pass from the law until all is accomplished.

The Babylonian Talmud (B. Meg. 14a) explains that Israel had 180 prophets who neither took anything away from the Torah nor added anything to it but for the reading of the Megillah, the book of Esther, on Purim. At some point that gemara was revised to “forty-eight male and seven female prophets.”

This wonderful tweet popped up just in time for this sermon: Him (@skrongmeat_): 2000 years n god still ain’t dropped the Bible 2 yet. Her (Yasmin Yonis): Aslaama Alakum. It’s the Quran shawty.

We could go further and cite the scriptures of the Baha’i. Truly there is no end to scripturalizing. So what have we learned? Scripture is flexible and expansive, and that scares folk who try to fix its boundaries at the place of their comfort. And so it would appear that each generation cries out, “This far and no further! Don’t change anything else, but keep the changes we made.”

Speaking of changing the text, the lectionary has cut out that nasty bit in Deuteronomy about Baal Peor that became the pretext for genocide and mass abductions, rapes and forced pregnancies.

The lectionary wants us to read these texts a-contextually. But I am a biblical scholar and this is a divinity school. We know that a text without a context is a pretext. So let’s do better in our reading, teaching and preaching. Let’s not skip over the ugly stuff, because there’s plenty of ugly stuff in our world that can no longer be ignored in the two-thirds world and ghettos and barrios of the imperializing world. The complex contexts of the Israelite scriptures might just be the hermeneutical key we need to proclaim a relevant and living word in or complicated context.

Deuteronomy is addressed to Israel, Israel-in-the-wilderness Israel. Who are we when we read this text? Are we Israel? We have a theological claim to being in the family, but should we just read from the perspective of Israel without reflection? (As we do, far too often.) By we here, I mean Christians. The answer may vary depending on what type of Christian we are. For example, in Deut 4:1 this Israel “will occupy the land.” How do you read that if your people are living under occupation or are a dispersed person? Are you Israel then? How do we as American Christians read this text? We are, all of us on occupied land. Some of us played no part in the theft of that land and were stolen ourselves. Some distance themselves from the actions of their ancestors, other identify fully with the tortured legacy of ours. Are we Israel? Should we be reading from their perspective?

The text is presented as a recipe, formula or perhaps incantation for how to succeed in the promised land. And it is, but it is a retrospective, composed after the monarchy had failed and lost the land that nine of those tribes had occupied to the Assyrians, edited into final form after Babylon had seized the rest. It is a tragic retrospective: If only we had…

There is classical Deuteronomistic theology underlying this text. Israel lost their land because they were disobedient. It was their fault for failing to obey God sufficiently, not because Assyria and Babylon and Persia were bigger or stronger, not because what empires do is gobble up smaller nations as Israel had done when they got the chance.

So who are we in that formulation? Do we as Americans, as Christians identify with Israel in this text, no matter our theology of adoption? What is our “land” in this paradigm? How is this text available to us giving its originating context and content are long past?

Christian exegesis has tended to focus on the import on teaching God’s commandments called for by the passage without necessarily addressing the “why” and “wherefore” of the text.

This is the context of “For what other great nation has a god so near to it as the Holy One our God is whenever we call on God?”

If we are to read ourselves as Israel then perhaps we are the Israel that composed, edited and canonized these texts: a failed would-be empire rewriting its history. This text is also also a message from the past to a people returning to their homeland with their complicated history of prayer and promise, conquest and colonization, immigration and infiltration, deliverance and deportation, rescue and return. If their descendants will truly follow these commands, just maybe they will re-create the society their ancestors dreamed of and articulated in the cultural and religious idiom of this text.

And we, with our empire tottering and no place for us to return, what shall we do? We have inherited these commandments with all of their baggage and ours. We must wrestle with them for they are enduring.

Jesus, himself a bar mitzvah, a son of these commandments promised:

Matt 5:17-18 Do not think that I have come to abolish the law or the prophets; I have come not to abolish but to fulfill. For truly I tell you, until heaven and earth pass away, not one letter, not one stroke of a letter, will pass from the law until all is accomplished.

As we wrestle with these texts to live into their vision of a just and ethical community articulated in Iron Age idiom, we may just find that the God they disclose is indeed: a god so near as the Holy One our God is whenever we call to her. Amen.