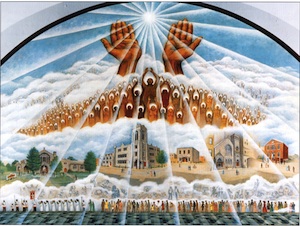 We are continuing to celebrate the Feast of All Saints focusing on those whom the Church has named saints and those whom we personally regard as saints; some celebrations were on All Hallows Eve, Halloween, seemingly disconnected from the Church’s day for many. We celebrate the Feast of All Souls focusing on all of the dead of all times, the holy dead and the unholy, saint and sinner, in and out of the Church. And now, we are talking about the return of Christ to the earth, the Second Coming, the Rapture. Yep, I’m a Church nerd, happily at home in the Episcopal Church, and I hope you are too, at home that is, and only nerdy if you want to be.

Our epistle lesson deals with some of the bedrock beliefs of the early and enduring Church: the resurrection of Jesus and those who believe in him, the eternal lives and communion of the saints who have died and, the return of the Messiah, the Christ, Jesus, to the world. We do not want you to be uninformed, sisters and brothers, about those who have died, so that you may not grieve as others do who have no hope.

These ancient words were crafted to comfort the early believers, some of the saints and souls whose feast days we celebrate. They were paying a terrible price for their faith. They were being mutilated and murdered, martyred. A deep and heavy grief permeated the early church, and I would say some fear. Some of the saints and martyrs were surely fearless, others I think were faithful in spite of their fear, transcending their fear, standing firm in the face of their fear, showing courage over fear. And there were those who wondered if it was all for nothing. Confessing Christ – not saying the words of a creed among our own folk with a few visitors sprinkled in – but publicly admitting to following a convicted felon, an executed traitor and rebel was to set oneself up to lose family and home, property and income, wealth and standing, status and freedom, one’s life and possibly the lives of one’s family by being burned alive, by claw and tooth of lions and other wild animals, by crucifixion, impaling or hanging, by torture, through blunt and sharp force trauma. Many had confessed Christ and so many of those had paid the price in blood and suffering. To those who loved them and ached for them, wept for them, longed for them, mourned for them, grieved for them, Paul wrote: We do not want you to be uninformed, sisters and brothers, about those who have died, so that you may not grieve as others do who have no hope.

It was easy to be hopeless then as it is now. There was violence and injustice at every level, from interpersonal relationships to the highest reaches of government. There were corrupt officials, and predatory institutions, and wolves in sheep’s clothing in religious assemblies, there was rampant police brutality and crushing poverty, abysmal public health policies and no safety nets for vulnerable peoples, gender discrimination, class discrimination, ethnic discrimination and religious discrimination, and there were also all the usual personal betrayals, broken hearts, neglected hopes and battered dreams.

There was also, particularly among those who believed that Yeshua ben Miryam L’Natzeret, Jesus born of Mary of Nazareth, was the Messiah promised in Israel’s scriptures, faith in the power of life over death, a power demonstrated in the resurrection of Jesus from the dead. A power witnessed by countless saints and souls who saw him alive, touched him and were touched by him, sat at table with him, walked and talked with him and, a power testified to in faith and sometimes the bloody deaths of their own loved ones. With that power was a promise, that death is not the end, that none of their loved ones was truly lost. They would see them again, be with them again: For since we believe that Jesus died and rose again, even so, through Jesus, God will bring with him those who have died.

But it’s a complicated promise and has caused no small measure of confusion in the Church and in the world since then, Harold Camping the man who has recently (wrongly and repeatedly) promised the return of Christ on a specific date is in good company. And there’s no small measure of distance between the idea of the return of Christ mentioned in this and other places in the scriptures and the idea of the rapture which developed quite a bit later and was related back to these verses in Thessalonians. Many have predicted the return of Christ and all of their predictions have failed. Even Paul thought he knew when Jesus would return: For this we declare to you by the word of the Lord Jesus, that we who are alive, who are left until the coming of the Lord Jesus, will by no means precede those who have died. It’s been two thousand years since Paul wrote “we who are alive” and neither he nor his readers are still alive. Or are they? It’s clear that Paul and his readers expected Jesus to come back in their time. In that regard he was like Harold Camping, but Paul did not pick a specific date – again and again and again. Paul didn’t stake his name or reputation on specificity, but he did proclaim in solidarity with the teaching of Jesus that the dead were in fact alive. So whenever Jesus comes, those who have already died will in fact be alive in the life beyond life and the life beyond death. Paul proclaimed that those who have died in the faith were not forgotten by God and would not miss out on the promises of God yet to unfold.

Those saints and souls who have passed on, are part of what one writer calls “a great cloud of witnesses” and what the Church calls “the communion of the saints.” They are all around us and sometimes we are more aware of their presence than others. That’s why so many churches like this one surround themselves with graveyards and others house crypts and columbaria. The three holy days when Christians and pagans attend to our ancestors in the world beyond our world and also all around us are not the only moments when our worlds connect. The saints and ancestors are always with us. Bishop Steven Charleston puts it this way:

Can you hear them? Can you hear them as they pass by, whispering on the wind? Can you feel them, feel their warmth, when they draw near, standing just beside you? They are the ones who have gone before, the saints who have touched our lives, whose memories shape us still. They are the family to which we each belong, ancient and never ending. Our ancestors watch over us, their constant vigil keeping. Their wisdom and care surrounds us, a river of healing flowing just beneath the sands of time. Can you hear them? They speak of a love they have seen, love beyond imagining, a love that holds us safe, until we rise to meet them.

“Until we rise to meet them…” Paul and Bishop Charleston speak of a resurrection in which we shall all share. For the Lord Jesus himself, with a cry of command, with the archangel’s call and with the sound of God’s trumpet, will descend from heaven, and the dead in Christ Jesus will rise first.

There are many stories about the return of Christ, many teachings, many interpretations, some confusion and more than a few jokes. One rabbi proposed settling the question of whether or not Jesus was the Messiah by asking the Messiah whom he believed would come to Jerusalem one day, “Nu, it this your first trip to Jerusalem?”

These promises in scripture hold as many questions as answers. The disciples of Jesus asked, “When will this be? And what will be the sign of your coming?” And Jesus warned them (and us) “Don’t let anyone lead you astray. Many will come in my name…” Some may remember that Jesus also said that there would be “wars and rumors of wars,” in other words nothing would change between now and then, but few remember that he said right after that, “but the end is not yet.”

In Matthew 24, the chapter before the one assigned today – which I think is a better fit with the epistle, Jesus mentioned famines and earthquakes, both common occurrences as “the beginning of birth-pangs;” those labor pains must have begun with the dawn of creation for there have always been earthquakes, and famine was an even more regular phenomenon in the ancient world as it is now. Jesus spoke of the suffering his followers would endure for his sake and every generation of persecuted Christians has seen themselves in his words. And by persecuted, I mean the Anabaptists whose murders Martin Luther sanctioned and the Catholics murdered by our own ancestral Church of England and English and Irish Protestants murdered by English and Irish Catholics, and the French Huguenots and Joan of Arc sainted by the same church that killed her and American and European Christian women burned at the stake and African Christians enslaved, raped, tortured and murdered. I’m not talking about someone arguing over posting the Ten Commandments or a cross on public property, I’m talking about Christians whose very identity threatens the powers that be who take them out of the world they are making in their image as a warning to others.

Jesus uses the ancient words of Daniel’s vision of a mortal and immortal one coming with the clouds in glory. Paul writes: Then we who are alive, who are left, will be caught up in the clouds together with them to meet the Lord Jesus in the air; and so we will be with the Lord Jesus forever.

These are issues that confound the wise. Our canticle today reminds us: The beginning of wisdom is the most sincere desire for instruction, and concern for instruction is love of her.

We do not want you to be uninformed, sisters and brothers, about those who have died, so that you may not grieve as others do who have no hope. Our hope is in the name of the One who waded in the waters of Miryam’s womb, walked the way of suffering as one of the woman-born, and woke from the grasp of death in the deep darkness of the morning. Amen.