According to Mark: After the sabbath Mary Magdalene, Mary the mother of James and Salome bought spices to the tomb to anoint Jesus’ body. They also saw a young man dressed in a white robe. The stone had already been rolled away.

According to Matthew:  After the sabbath at first light, Mary Magdalene and the other Mary went to the tomb, experienced an earthquake and witnessed an angel descend from heaven and roll away the stone opening Jesus’ tomb. The angel had a substantial conversation with the women, commissioning them to preach the Gospel which they left to do.

According to Luke: After observing Shabbat as faithful Jews, Mary Magdalene, Joanna, Mary the mother of James and other unnamed women who followed Jesus went to the tomb at dawn the next day with spices and ointments for Jesus’s body. The encounter two men in dazzling white clothes. The stone had already been rolled away.

According to John: Mary Magdalene went to the tomb alone and empty handed. The stone had already been rolled away. She leaves and reports to Peter and perhaps John. Somewhat out of sequence, she then announces the resurrection to other disciples. Peter and his companion enter the empty tomb then leave. Mary returns, encounters two angels in white and has a conversation with them. Jesus appears and tells her not to cling to him then disappears. 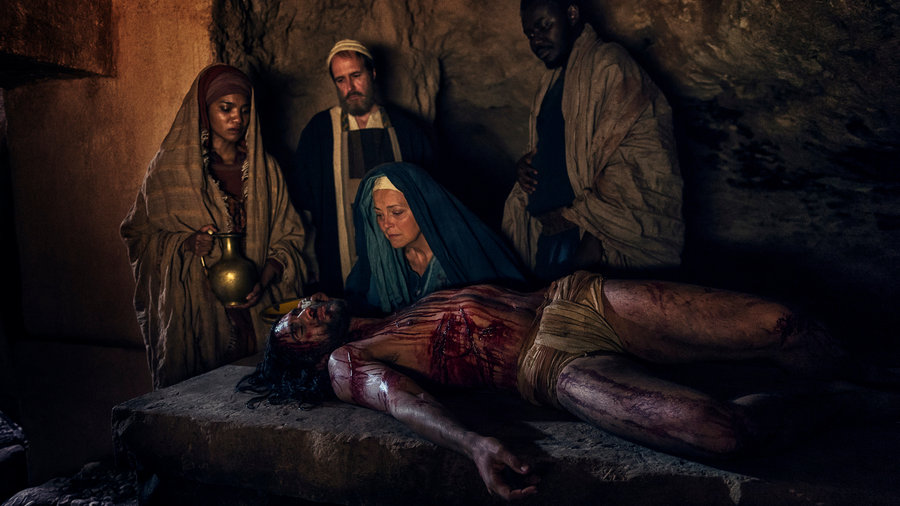 According to Roma Downey and Mark Burnett: Immediately after the crucifixion, Joseph of Arimathea takes the body of Jesus to his own tomb with Mary the mother of Jesus, Mary Magdalene who brings water to wash his body accompanied by James (I believe). The say kaddish (the mourner’s prayer) over his body in Aramaic. A tender, touching but ahistoric scene. Kaddish is said outside of the tomb once it is closed. They also neglected to tear their garments. 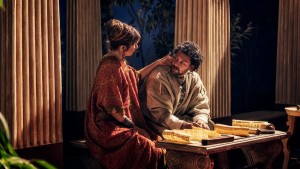 Their ignorance of and carelessness with Jewish tradition is neither new nor unexpected, both characterize their previous Bible series. That series like this one was also characterized by an erasure of biblical women. The series is loosely based on John’s gospel which is not the earliest (Mark), which offers the minority report on the presence of women at this most sacred moment, and presents the one woman, running to and fro like a chicken with her head cut off. I believe it is an intentional choice. Rather than tell the story of Jesus’ women disciples – “last at the cross first at the tomb” as we preach in the Black Church – they erase them all but for a token Mary and give us instead the wife of the high priest. Certainly he had one, but she is not in the Gospel.

She is not an apostle to the apostles. Mary of Magdala was. As were her sisters in the gospels, Mary the mother of James, Salome and many other women whose names have been stolen from us. 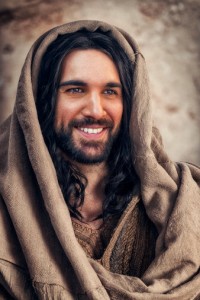 Women are not all that has been erased from this production. Jesus’ ethnicity is no where to be found.

For some reason they cut the angels out of John’s resurrection account. But Jesus has a fierce weave, so that’s something. #ADBibleTalk

His limp wig successfully communicates his separation from the semitic Jewishness of other characters who have curly hair and in three isolated cases, brown skin.

When Peter sees Jesus after the resurrection he reaches for his hair because even he can’t believe that wig. It’s unbeweavable. #ADBibleTalk

Jesus is not brown or visibly Jewish and that is intentional. The whitewash of Jesus from the last iteration is a key component of the gospel they are creating, one in which white identity is core, crucial and sanctified.

In order to tell their story they ran between the gospels of John and Matthew and back to John in a dizzying loop. Then let to Acts for the Ascension. There was one stunning image of the Ascension: billowing golden clouds with what I believe we are to understand as angels in them at intervals forming a sort of pyramid. (I couldn’t find the image.) However, it was less an ascension than a descent in that Jesus was never taken up to heaven: He walked up a hill in a beam of light to the top where heaven met earth then the camera cut away, A bit of a cinematic let-down.

I confess, I feel suckered into watching this thing. I’ll probably watch and tweet and comment the rest. I have a hard time leaving anything unfinished. But Hollywierd, I am seriously through with your white bible epics after Noah. (I haven’t watched God and Kings and shall not.)