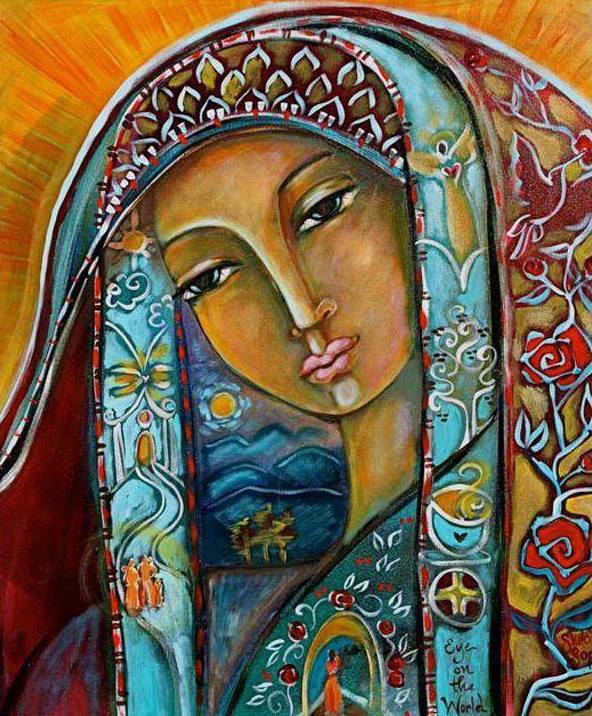 A vision of Wisdom, “Her Eye On the World” by Shiloh Sophia

In the name of God who reveals herself to be more than we ever expected. Amen.

The insistence that God is male and only male has not rung true to more than half the people on planet from the time the Israelite Judean elite began to codify their sacred texts shaping the religions that have descended from them. It does not ring true to many of us who are women, femme, or non-binary; it doesn’t ring true to many who see themselves reflected by design in the dominant portraits of God. I postulate it never rang true to authors and editors of the Hebrew Scriptures and Greek deuterocanonical writings, to Jesus or the voices in the New Testament. The claim is easy to defend because the scriptures use a wealth of language, feminine and masculine, to name and describe God starting with the very first two verses of scripture where God is He who created the heavens and the earth, and She who fluttered over the face of the deep. Today we have Wisdom, she who when compared with the light is found to be superior, for the light is succeeded by the night, but against wisdom evil does not prevail. And, we have she who when listened to will grant security and ease. And, we have she who though not Mary is also the mother of Jesus.

In spite of being conveyed in a binary language, the God of the Hebrew Scriptures and of those that followed is not constrained in a binary box, or even a singular box, not even a Trinitarian box. God and her divinity transcend all of the names, descriptions, imagery, and attributes ascribed to her in the scriptures. She is more. In the previous century when I was in seminary, the Rev. Dr. Kelly Brown Douglas taught me that language is a tool and when it comes to naming or describing God, an inadequate one. Yet it is the only tool we have. We wield it like the back end of a screwdriver when we need to drive a nail but have no hammer. It gets the job done but is less than perfect, less than elegant.

In the scriptures the Wisdom of God is presented as a capital-P-person. She is a companion and co-creator and, and in some texts enables God’s creation of the world. It seems to me that the sorting out the relationship between God and Wisdom is much like what Christians do trying to explain the Trinity. We love us some fuzzy math. It could be said that she, Wisdom, precedes from God in the same way Jesus and the Holy Spirit are said to precede from God while at the same time also being God. So is the Trinity a Quaternity? This is what I mean by fuzzy math. But, no, God and Wisdom are no more separable than you are from your shadow or I argue than God is from her spirit. It’s not much of a secret that I fail at fuzzy math and am not much of a Trinitarian. Eventually some Greek-speaking Christians would identify Wisdom with Jesus linking wisdom and the word. But Jesus did not identify Wisdom with himself. Rather he identifies himself as her son.

In today’s gospel Jesus responds to his critics by saying, “Wisdom is vindicated by all her children,” situating himself as her child. He would not have understood wisdom as a mere character trait, adept in head, heart, and hand as it means so often in the Torah and Prophets. It is in the poetic texts beginning with Proverbs that Wisdom makes her debut as a personage speaking in the first person and sashaying down the street looking to gather those who would be her children. In the book of Wisdom she gets her own body of literature, an autobiographical midrash of her Proverbs portrait. And then somewhere in the sources of Matthew and Luke’s gospels there is a tradition about Jesus appealing to the person of Wisdom in his self-defense when people call him a drunken gluttonous party animal with bad taste in friends. Later on in Luke Wisdom also speaks in the first person, Jesus quotes her: “Therefore also the Wisdomof God said, ‘I will send them prophets and apostles, some of whom they will kill and persecute…’ No one knows where this is written outside of the gospel but there is a later allusion to it in the Quran.

What are we to say to these things? God is more than we think or imagine. God is and is in all of the flesh the world loves to despise. We are seeing the low regard men and some women have for women’s bodies even as some of them covet them and gain access by any means necessary. Women and that which is perceived to be feminine often–but not always–represented weakness, secondary status, and subordination in the world of the scriptures and more so for ancient Israel that its neighbors. The rhetoric many prophets found most effective for shaming the men who led and failed to lead Israel was rooted in women’s bodies and our bodily processes and what could and did happen when those bodies and processes were not subject to male control.

It is I find, a witness to an eternal truth that in the same collection of texts that calls women whores, likens the offenses of the nation to menstrual waste, and describes the capture of foreign cities as rapes with lurid details occasionally perpetrated by God that there are portrayals of God that transcend the categories of gender as they understood them then. That truth is that God refuses to be imprisoned in the idiom of domination, even when that idiom supplies the most common vernacular for God. That is certainly what Jesus demonstrated reveling with those who enjoyed the pleasure their bodies afforded with food and wine. Sinners, tax collectors, drunks and gluttons can easily be read as sex workers and women outside of male control, the wealthy whose practices exploit the poor, drunks and addicts of all kinds, and people whose bodies were uses as a pretext for fat and body shaming. Sometimes prostitutes are specified as his companions other times included or represented by “sinners.” It’s the tax collectors who mess me up. They are not on my politically correct marginalized team. But Jesus still rolls with them, finding God’s presence in each one. The diversity of his companions, the diversity of humanity and the human condition are all markers for the expansiveness of God’s nature and love. He learned that love from both his mamas. Mama Mary taught him a love that put puts one’s vey body on the line for the beloved and Mother Wisdom taught him to find his beloveds in the streets and welcome them home.

God is so much bigger than our culture and customs, vernacular and idiom, and if we listen to Wisdom and her child Jesus and follow their holy example we will find so much more than new language for God. These diverse portraits tell me that God cannot be fully known on the upside of power curves. Here the presence of the tax collectors helps me. Partying with Jesus exposes them to a side of humanity they may have never seen or forgotten, reminding them that the world is bigger than their world and there is something much more valuable than money, the knowledge of the fullness of God represented by the diversity of her children.

The boundary crossing God inhabits and transcends all of our categories, marking each one, each aspect of ourselves, our identities, our bodies, as holy, as fit for the divine, for after all it was in the much demonized reproductive space of a woman’s body that God became incarnate in a family of choice that defied their own categories: A God who fathered without genitalia, a woman who made her own reproductive choice, a celibate partner (for a time), and another mother, or if you distinguish Wisdom from the Holy Spirit, two. Come, let us sup at Wisdom’s table. Amen.

Luke 7:31 “To what then will I compare the people of this generation, and what are they like? 32 They are like children sitting in the marketplace and calling to one another,

Wisdom 7:26 For she is a reflection of eternal light,
a spotless mirror of the working of God, and an image of his goodness.
27 Although she is but one, she can do all things,
and while remaining in herself, she renews all things;
in every generation she passes into holy souls
and makes them friends of God, and prophets;
28 for God loves nothing so much
as the person who lives with wisdom.
29 She is more beautiful than the sun,
and excels every constellation of the stars.
Compared with the light she is found to be superior,
30 for it is succeeded by the night,
but against wisdom evil does not prevail.
8:1 She reaches mightily from one end of the earth to the other, and she orders all things well.

Proverbs 1:20 Wisdom cries out in the street;
in the squares she raises her voice.
21 At the busiest corner she cries out;
at the entrance of the city gates she speaks:
22 “How long, O simple ones, will you love being simple?
How long will scoffers delight in their scoffing
and fools hate knowledge?
23 Give heed to my reproof;
I will pour out my thoughts to you;
I will make my words known to you.
24 Because I have called and you refused,
have stretched out my hand and no one heeded,
25 and because you have ignored all my counsel
and would have none of my reproof,
26 I also will laugh at your calamity;
I will mock when panic strikes you,
27 when panic strikes you like a storm,
and your calamity comes like a whirlwind,
when distress and anguish come upon you.
28 Then they will call upon me, but I will not answer;
they will seek me diligently, but will not find me.
29 Because they hated knowledge
and did not choose the fear of the Holy One,
30 would have none of my counsel,
and despised all my reproof,
31 therefore they shall eat the fruit of their way
and be sated with their own devices.
32 For waywardness kills the simple,
and the complacency of fools destroys them;
33 but those who listen to me will be secure
and will live at ease, without dread of disaster.”